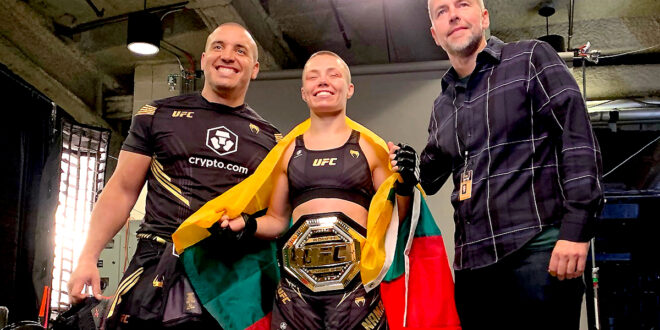 Just as we might expect of a biopic about a female champion in the sport of “ultimate” fighting, the new documentary, “Thug Rose: Mixed Martial Artist,” by veteran Lithuanian-American filmmaker Marius Markevičius, can be described as the ultimate sports psychology film.

Whereas Markevičius’ Lithuanian basketball documentary, “The Other Dream Team” (2012), hinged on the nexus between sports, nationality, and geopolitics, there’s a whole other level of psychology to a film about a 115-pound woman who excels at choking, punching, or kicking her opponent to submission before they can do the same to her.

Rose Namajunas (Nah-mah-YOO-nahs) is the American-born daughter of third-wave Lithuanian immigrants. In her Ultimate Fighting Championship (UFC) strawweight bouts, there are no padded boxing gloves or taking-a-break clinches. Though her matches run a maximum of five, high-intensity rounds, they are often decided in their initial minutes by a “sudden death” strike that penetrates an opponent’s defenses like a bolt of lightning.

But not to worry – Markevičius’ film, which was funded by the UFC and is exclusively streaming on its Fight Pass channel, is mercifully unbloody. And you don’t have to be a UFC fan or mixed martial arts (MMA) disciple to appreciate either Rose’s psychological or sports dramas.

Markevičius’ brilliant “surprise” opening instantly sets the tone for the rest of the movie. When he gives us diminutive, crew-cut “Thug Rose” stepping into the spotlight, not for brutal combat but to play Chopin’s Fantasy Impromptu on a concert piano, the core contradiction between Rose’s fragility and her ferocity is also spotlighted.

The balance of the film consists of concise, impactful bits of Rose’s backstory and clips from interviews with the fighter and her inner circle interwoven with thrilling footage from the five major bouts, 2017-2021, in which Rose became the first woman ever to win, lose, then reclaim a UFC title.

Much of the dramatic tension in the film arises from our growing perception of Rose’s vulnerability, both emotional (“demons in my past that I deal with every day”) and physical (lingering dread from a head slam that cost her title). As we root for her to survive each new bout with minimum damage, it doesn’t help our nerves that Rose never carries as much bulging musculature into the ring as her opponents. But what she lacks in hulk and bulk, she more than makes up for with her signature lithe and rhythmic footwork.

Making his film about Rose’s hero’s journey took Markevičius on a similar rollercoaster. In a recent telephone interview with Draugas News, he described the particular intensity of waiting with Rose in the tunnel before her 2021 Madison Square Garden rematch with the same Chinese fighter Rose had defeated earlier that year to reclaim her championship.

“It was like waiting in the bowels of the Colosseum,” Markevičius recalled. “Fighters were trudging back to the locker room after their matches, spent and bleeding – some were even put into waiting ambulances. For me, it was nerve-wracking, but Rose was just calmly taping her hands. Her ability to balance her emotions and past traumas in a moment like that was remarkable.”

Rose shares the classic “Rocky” backstory. As a disadvantaged youth from a rough Milwaukee neighborhood, she grew up on the streets (and, paradoxically, studying piano with her mother and at the Milwaukee High School of the Arts) while she found self-worth and community in the local “gym” (technically, a series of martial arts studios).

However, MMA ultimate fighting is a world away from that venerable Hollywood boxing genre (think “Cinderella Man” and “Rocky” I, II, III, and IV), in which the male heavyweight gets head-rocked by punch after punch in slow-mo while remaining improbably on his feet – then going on to win an hours-long match.

The violence in Markevičius’ film is far more staccato and realistic, even as it benefits from discretion in editing and a non-voyeuristic eye. Instead, the director finds it more interesting to frame Rose’s fights within the disciplined and self-affirming practice of the martial arts.

There is also a very Lithuanian context to Rose’s championship quest, just as in “The Other Dream Team” – a film Rose admired—thus creating an easy connection between the director and his subject from the start.

However, the “main event” in Rose’s backstory pivots not on nationality but on the physical and sexual abuse in her childhood that has made her both physically fierce and emotionally vulnerable.

And at one startling moment in the film, you realize that Rose’s UFC bouts, as much as they are intense athletic competitions, are also revisionist reenactments of past traumas. Rose explains: “It’s just something from my past that I really like to hurt somebody who hurt me.”

She goes on to recall the one-sided abuse she once suffered—how a child victim who already can’t fight back is rendered even more helpless by an abuser’s lies, denial, and manipulations. At least Rose’s MMA matches now are “two-way” and “honest,” she points out. Maybe that also makes them a form of reparative justice.

While Rose, the child, only wanted a locked door, what adult Rose relishes is a fair fight with someone the same size, weight, and gender. There are no victims in this scenario. Just like her opponents, Rose can more than defend herself, unlike during childhood with a predatory stepfather.

And the fact that in those special moments when Rose is her best self, she can actually be the best – champion of the world – makes every win even more redemptive.

Even Rose’s distinctive crew cut communicates her will to a modest and disciplined kind of power that is not given but earned. What use can there be in her world, anyway, for the empty blandishments of feminine beauty when these are less likely to project her ethos of discipline and strength than the weakness and exploitability she suffered as a child?

A Special Inspiration to Women

For many women, I believe that Rose’s trauma and indomitability will resonate long after the credits roll. Her recovery of self-worth and personal power through a type of physical aggression traditionally reserved for (and abused by) men will speak symbolically of turning the tables on every kind of gender exploitation and violence.

In the end, what Markevičius hails as Rose’s profound “emotional intelligence” – her conscious connection to her suffering (“One minute she’s crying, the next minute she’s killing the bag”)—makes her the rarest kind of champion. It seems unlikely that such emotional self-awareness and openness would even be possible in a male athlete.

If any movie ever demanded a sequel, it’s this one. After getting to know Rose—even worrying about her as one would a friend or family member constantly exposed to injury – how can we not want to see the rest of her story?

This level of engagement would not be possible without Rose’s extraordinary honesty, her faith in Markevičius, and her courage in speaking openly about her life and mental health challenges. Our investment in Rose’s story is also a testament to Markevičius’ patience, skill, and sensitivity in bringing to life a sports hero whose strength is not just indistinguishable but derived from her vulnerability.

As the director of “Ashes in the Snow” (2018), based on Ruta Sepetys’ best-selling young adult novel, “Between Shades of Gray,” Markevičius was gratified to see that film become the biggest box-office draw of all time in Lithuania.

“Thug Rose” will also have a theatrical release in Lithuania on Feb. 10—and before that, a screening at the Scandinavian Film Festival L.A. in Beverly Hills at 3:30 p.m., Jan. 21. Lithuanian-American community screenings across the U.S. will follow.

The film premiered at the Austin (Texas) Film Festival on Oct. 30, 2022, and began streaming on the UFC Fight Pass channel on Nov. 9.

Unique in the English-speaking world for his successful films touching on Lithuanian heroes and history, Markevičius is vetting several new scripted feature ideas. Meanwhile, he is co-producing a documentary about the courageous pro-democracy movement in Lithuania’s long-time autocratic neighbor, Belarus.

“As a fan of all Lithuanian sports figures and other successful Lithuanians around the world,” he explained, “I was naturally intrigued by Rose because she’s such an accomplished and fascinating individual.

“I have a passion for helping people learn about the country of my roots that’s so special to me, so, there’s always that thread when I’m looking for new projects. Or maybe you could say it’s because of my interest that Lithuanian-themed projects always somehow find me.”

Previous A War Unknown No More