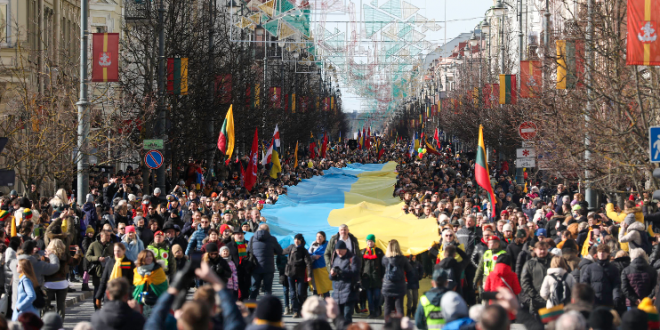 Thousands of Lithuanians gather in solidarity with Ukraine.

To Ukraine: A Lithuanian Volunteer

June 30, 2022 Interview, War Comments Off on To Ukraine: A Lithuanian Volunteer 201 Views

The current invasion of Ukraine shook Richard, a 30-year-old Lithuanian, to the core of his being. Emboldened by the bravery of Kyiv’s defenders, he resolved to join the Ukrainian military forces in their struggle against the invading Russian army. “Richard” is a pseudonym; he asked not to be identified by name or photographed. I spoke with this young warrior about his decision and expectations before his departure to war-torn Ukraine.

I’ve been considering going to Ukraine since the beginning of the invasion. I mentioned it to my on-again, off-again girlfriend, that is, of my intent to go and defend Ukraine right after the war broke out. Her response: “What are you talking about? Are you serious?” made me pause. I told her I wouldn’t go back on my decision. She dumped me; she wouldn’t even respond to my calls. With the freedom of Ukraine being the cause, I can handle this personal loss.

What will your status be in the Ukrainian military?

I will be a private military contractor with a salary of around 4000 U.S. dollars. Monthly. Not bad, considering that I was struggling to make ends meet here. I will be part of an international legion that engages contractors and mercenaries.

I made several calls to Ukraine’s Embassy in Vilnius and the Lithuanian Ministry of Defense. I also spoke to several Lithuanian men who were already committed to fighting in Ukraine. I am scheduled to leave for Ukraine later this week (in mid-March – L.J.) after completing all the clearance procedures.

What did you do for a living in Lithuania?

I juggled several different jobs. I’ve worked as a security guard and laborer in construction. I studied at a vocational school in Klaipėda. After my father died several years ago, I was depressed. I still feel so. I sold the properties he left me. (I’m not sure if I did the right thing.) For the last two years, I’ve been living in Kaunas.

So financial considerations helped you make the decision?

They did. I’ve always been short of cash. I’ve made some bad financial decisions. But don’t get me wrong: I am not going for the money but to ensure that Lithuania is not next on Putin’s hit list.

You know you will be putting your life on the line. Is it worth it?

Of course, I know. I’ve been in the army. I know how things are. By liberating Ukraine, I will defend you as well as my other fellow Lithuanians.

If we do not stop the “Colorado beetles,” they will crawl under our skin… and over our land.

(Colorado beetle is a term employed by Ukrainians to characterize invading Russians. The insects’ bright orange-and-black stripes are similar to the orange-and-black St. George ribbon associated with the Russian military. The Kremlin now uses the ribbon to portray its claimed “heroic battle against fascism.” But it’s not just the ribbons that have Ukrainians drawing parallels with Colorado beetles. The destructive insects are paired with imperialist plots and foreign invasions. – L.J.)

Ukraine is just their first prey; I am sure Moldova is the next target, and the Baltic nations are also in imperial Russia’s not too distant plan. I do not doubt that.

To answer the second part of your question – is it worth it? It is indeed. I am not self-indulgent. Expensive items, like brand-new cars or luxurious homes, which I never had, do little for me. My code of values is different – it includes sacrifice, camaraderie, valor – ideals that are often lacking in today’s society.

Some are afraid of sparking off World War III…

To me, World War III has already begun. Look, Russia has bombarded a nuclear power plant in Ukraine. If it and the other three Ukrainian nuclear power plants get blasted, deliberately or not, the consequences will be horrific for all humankind – tantamount to fallout from a nuclear war.

The sanctions against Russia are unprecedented in their severity. That, to me, is another sign of an ongoing world war. If Europe and the world fail to stop Russia now, it will encroach on them – sooner or later. The West has been underestimating Russia for too long.

How were you to prepare in leaving for Ukraine?

It was suggested that one acquire a helmet and a bullet-proof vest. The former costs 170 euros and the latter around 300 euros. It depends on the manufacturer. I did not have enough money for both, so I only bought a helmet.

I hope you don’t mind my asking, but who did you name as next of kin in your application? In case of your death, I mean?

I left the section blank – I do not have any close family members or friends to write in the section. My parents have died. I am kind of a lone wolf. I’ve always been that way.

Honestly, separating from my dog, a five-year-old huskie that I loved tremendously, was the hardest thing I had to handle in preparing for this trip.

I accepted my girlfriend’s words that she was leaving me stone-faced. After she told me, I only uttered “gotcha.” But I could not withhold my emotions when I left my dog with a distant friend – I hugged the hound and burst into tears. She was crazily licking my face as if sensing my departure. There is always the last time for everything.

Do you know where in Ukraine you will be stationed?

In Kyiv, the epicenter of the war. Even if they put me somewhere else, I’ll go to Kyiv.

How do you want to be remembered?

The formulation of your questions suggests that you are far removed from military reality. If I get torn apart in a battle by a blast, the likelihood is slim that pieces of my remains will be collected. I know it. I’ve heard about it from others.

I’ve provided my DNA samples like everyone else who goes to war, so, technically, every bit of my flesh is traceable. Perhaps we’ve lived in peace too long to recognize the explosiveness of the present war. Things will get much worse before they get better. That’s my gut feeling.

The article was published in “Draugas NEWS”, March 2022 edition.

Previous The Parallels of Dita
Next An Immigrants’ Grandson Remembers: Life and Death in a Pennsylvania Coal ‘Patch