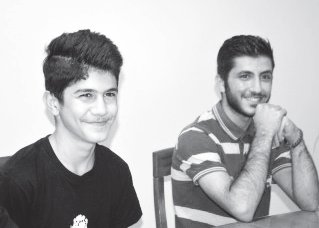 refugees from Iraqi Kurdastan, Mark and Milad Kani, are now in their fifth month in Lithuania.

From a distance, the three teenagers blend in almost perfectly with a crowd of students at a Catholic high school in the Lithuanian capital. Their very dark hair sets them apart from many of their classmates, but the strongest clue to their newcomer status is how they use gestures as much as words to communicate with their new classmates.

It is a month into the school year, and the three – brothers Mark and Milad, and their cousin Klodya – know they need to learn the language of their new country. They have known much harder things in their lives during the past 12 years.

“Before leaving early in the morning for work, I’d kiss my boys, unsure if I would make it back home. The militiamen were rampaging all around, so my boys could not attend school. Women, especially, could not feel safe and had to wear hijabs to conceal their faces. My wife would stay home most of the time,” recalls Mark and Milad’s father, Dawood Bnyamin Kani.

In search of a safer life, he quit a well-paid job as a manager of a construction site in Baghdad, and in 2006 moved the family to Erbil, the capital of Iraqi Kurdistan in the north.
Squeezed between two military conflicts, Erbil had somehow managed to escape the miseries of the communal violence in Iraq and deadly advance of Islamic State. But when this “untouchable” city started to succumb, Bnyamin Kani, 47, quickly Lithuania: Image Breakers made up his mind to get his family out.

Leaving Erbil early last summer, they went to the Turkish capital, Ankara, where they obtained visas for travel to Lithuania. When they and members of two other Chaldean Catholic families from Iraq, 15 people in all, finally reached Lithuania in July, the local Catholic Church welcomed them. The newcomers received residence and work permits in early November and are now waiting for their asylum applications to be processed.

Bnyamin Kani, his wife Sanaa Ablahad Elia, and their sons Mark, 14, and Milad, 17, are now in their fifth month in Lithuania.

“I had never heard of Lithuania,” the father confesses before adding, “It’s good to be in Europe. It means safety.”

Not Their First Choice

Lithuania is far from making most asylum seekers’ wish-list. Here, as in most other recent European Union members, politicians have tried to wriggle out of the EU’s mandatory migrant relocation project, and in some cases indicated they were ready only to accept Christian refugees.

When the relocation scheme passed by majority vote, Lithuania was obligated to accept 1,105 asylum seekers over the next three years. The decision caught the population and many local authorities off-guard.

Only a few of the country’s 60 municipalities agreed to accommodate migrants from overcrowded Italian and Greek reception centers, with the rest expressing concerns over security, assimilation, and the effect of an influx of Muslims.

“They’ll have to rape me before I’ll agree to take in those, as you call them, refugees. I do not intend to accept any of them,” Valdemaras Valkiūnas, mayor of Biržai, told Lithuanian media in September.

Flicking through Lithuanian websites can give the impression that cyberspace teems with such comments.

“The unwillingness to accept refugees shows the weakness of Lithuanian leaders to take unpopular decisions,” political analyst Kęstutis Girnius said. “Their biggest fear is of angering that part of the society which is against migrants.” Last year, Lithuania granted asylum to just 177 applicants and rejected 106 requests, according to the Interior Ministry.

How One Family Made a Difference

But remarkably, Bnyamin Kani’s family is already shattering those fears – both in the local community and at school.

“For us, they are like a refugee poster family – very nice, courteous, and intelligent,” said Violeta Ališauskienė, the principal of Versmės Secondary School. “Quite a stark contrast to what we tend to see on the TV screen. These kids even help our teachers to be better.”

Lithuanian teachers have been talking for years about acquiring new cultural competencies, but now they are picking them up on the go through daily contact with students with different cultural backgrounds, customs, and languages.

“Having the children here is certainly a challenge because it forces us out of our comfort zone, but it prompts us to grow,” Ališauskienė said.

Pupils of as many as eight nationalities attend the school, which also accommodates 107 special-needs children with disabilities.

Adapting to their new school is a challenge for seventh-grader Mark, eighth-grader Klodya, and 10th-grader Milad.

In the first year, they are taking preparatory classes in Lithuanian language and culture. The teenagers can expect transfers to regular classes the following year.

“I’m confident they can make it. They are smart kids,” Ališauskienė said.

“The children are talented, motivated, and spirited,” agreed Ernesta Smalinskė, their Lithuanian teacher, saying she was confident they will know soon the language well enough to start taking regular classes in some less language-intensive subjects.

When the teacher introduces the Lithuanian word “para,” meaning “a day,” the trio erupt in laughter.

“That’s an easy one! It means ‘money’ in Arabic,” they spring up, shouting. “I love the experience,” Smalinskė says. While the youngsters are immersed in the new language, their parents attend a Lithuanian language course provided by the Catholic charity Caritas.

“The language is very hard. The kids are much better learners than we are,” Bnyamin Kani grins as his wife nods approvingly at his side. The family lives in a house provided by Caritas, which also covers all the utility costs and local travel expenses, and allots 40 euros per person for food weekly.

He and his wife recently attended a parents’ meeting at the school, where they sat near the front and quizzed the school administration about its teaching facilities and curriculum.

“They left an impression of being a very intelligent, inquisitive, polite and child-loving couple,” the principal said.

She is especially impressed by the three youngsters’ politeness.

“After our teachers come into class, the brothers immediately jump to their feet out of respect. Lithuanian children just don’t do that anymore,” she said.

“This is what I have always taught my sons – respect,” Bnyamin Kani says.

Differences in behavior and social mores appeared as soon as the three teenagers began school. Teachers say it took them some time to realize the importance of doing homework, for instance.

Then there is the question of how to behave around the opposite sex.

The brothers, who attended an all-boys school in Iraq, still shyly look away when boys and girls give each other friendly hugs when they meet.

“If my sons decide ever to marry Lithuanian girls, we are fine. But now they are kind of aloof – both, especially the youngest, do not approach girls first. That’s what they teach in Iraqi schools,” their father says.

The length of 15-year-old Klodya’s skirt was also up for discussion. Her parents seemed very sensitive about the uniforms some girls at the school choose to wear, with skirts stopping just above the knees.

“Frankly, we thought it would be much longer than other girls’ skirts, but we were wrong. Klodya showed up on 1 September in a skirt above the knees. They are very adaptive,” Ališauskienė said.

“I like my new friends here, the teachers and school. Unlike the boys, I find Lithuanian easy,” Klodya says, smiling.

“I definitely want to stay in Lithuania, but I am missing my other sisters and the rest of my family, who remain in Iraq. I want to hope they are safe there,” she adds.

Asked how she feels about going to school with both girls and boys, she says quietly, “For me, it is not an issue any more.”

Klodya’s father died suddenly in October. She plans to stay in Lithuania with her mother, brother, and sister, Alisauskiene said.

Mark, meanwhile, is making plans to meet some of his friends after school. “This is going to be fun,” he says confidently.

Milad, the oldest, insists he loves it here. “I don’t miss anything in Iraq. We were not safe there, and we are safe here. That’s what matters most to me.”

The new arrivals seemed to enjoy the spotlight cast by local media last summer, but the media attention worries the school principal.

“At school, we are striving to make sure they live normal, ordinary lives. They have to learn now, not find themselves on the covers of magazines,” Ališauskienė said.

Bnyamin Kani, an engineer by profession, said he would seek a managerial job in the construction industry once his work permit was approved.

“With the will of God and with the help of the Church it will happen soon,” he says. He received his permit shortly after giving this interview.

The Iraqi immigrants belong to the Chaldean Catholic Church, many of whose faithful have been displaced by years of fighting in Iraq and Syria, the church’s traditional centers. About 10,000 Chaldean Catholic families originally from less secure parts of Iraq have been welcomed in his diocese, Archbishop Bashar Warda of Erbil has said.

Lithuania’s Roman Catholic authorities worked with the Erbil archbishopric to arrange the Christians families’ journeys to Lithuania. Church authorities, however, have temporarily shelved a plan to sponsor more Christian families.

“If not for the Church, we would not be able to support ourselves. They are helping us move to a new apartment closer to the school,” Bnyamin Kani says.

He says he would like to see more Iraqi refugees come to Lithuania.

“So far, we haven’t met any other Iraqis in Vilnius, only a Kurdish man. In Scandinavia, it is common to see Iraqis and Syrians living in the same neighborhoods, mingling and marrying each other. Religion is not an issue there,” he says.

Asked if he would ever want to bring his family back to their homeland should peace return, he says, “It’s too early to think of that. It may depend on my sons: If they learn Lithuanian and enter local universities, I don’t think it would make sense to go back.”

A couple of years ago, Lithuania’s Lutheran Church brought over 39 refugees from Syria, but by now all of them have left for Western Europe, mostly Germany.

Ilma Varžinskaitė of Caritas said the Iraqis are a different story.

“The Syrians did not submit requests for asylum, but the Iraqis have already filed applications. Integration is a two-way street. So with cooperation from both sides, it may pan out, and then the chance that the asylum seekers will leave Lithuania is minimal,” Varžinskaitė said.

“We like Lithuania,” Mark and Milad’s father says. “It’s an amazing feeling to rest our heads on the pillow at night knowing that no one will blow us up.”

Linas Jegelevičius is a freelance journalist in Klaipėda, Lithuania.

reprinted with permission from Transitions www.tol.org.