Home - Art - Museums: Prehistoric Lithuania a New Museum Dedicated to the Past 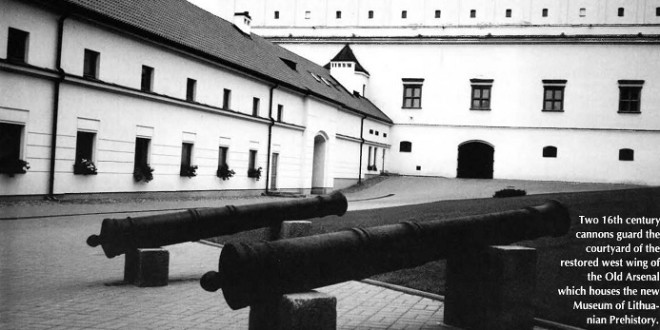 A poster in front of the museum invites passersby to visit the new Archaeology Exposition.

Museums: Prehistoric Lithuania a New Museum Dedicated to the Past

September 15, 2000 Art, History-1900+ Comments Off on Museums: Prehistoric Lithuania a New Museum Dedicated to the Past 1,643 Views

Prehistoric Lithuania a New Museum Dedicated to the Past

IN THE HEART OF VILNIUS, LITHUANIA’S CAPITAL, rises Gediminas Hill. At 158 feet it towers over the city spread out below. Here — so legend says — King Gediminas founded Vilnius in the 14th century, making it his permanent capital. Archaeologists and historians say that a settlement existed here long before Gediminas. No matter. Gediminas did make Vilnius the center of his realm. The original wooden fortress atop this hill was soon replaced by a brick and stone castle comprising towers, palace, chapel, and outbuildings. In subsequent centuries, another castle was built at the base of Gediminas Hill, a complex that included a Renaissance-style palace, church, arsenals, and towers. Today all that remains of the Upper Castle is one beautifully restored tower, now a museum, and remnants of other buildings that once stood here. Of the Lower Castle, much more remains: the original medieval church on the site transformed into a majestic Neo-Classical cathedral in the 18th century, a 14th century tower to which has been added a bell tower, clock tower, and steeple, a 16th century arsenal now housing the Museum of Applied Arts, and an 18th century arsenal housing the National Museum of Lithuania. Excavations are currently in progress on the site where the Renaissance palace once stood and it is hoped that a replica of the palace will be constructed by 2009, the year Lithuania will celebrate the 1000th anniversary of its first mention in historical records.

But long before Gediminas “founded” Vilnius, long before his predecessor Mindaugas molded the various tribal groups into an incipient Lithuanian nation in the early 13th century, long before 1009 when what was to become Lithuania was “discovered”, there were people occupying this territory bordering the eastern edges of the Baltic Sea.

In April 2000, a new museum opened paying tribute to these earliest “Lithuanians”. Officially part of the National M useum of Lithuania, the new Archaeology Exposition covers 12,000 years of Lithuania’s prehistory, from approximately 11,000-10,000 B.C. to the formation of the Lithuanian nation around 1240 A.D. Artifacts have been gathered from early settlement areas, hill forts, and — especially — burial sites throughout the country.

Appropriately, the Archaeological Exposition is housed in the restored west wing of the Old Arsenal located between the 16th century Old Arsenal and the 17th century New Arsenal. It replaces a previous archaeological exposition that was on display for 30 years in the National Museum.

The Archaeology Exposition is beautifully presented. It’s the way I wish all museums would be. Occupying a building that is itself historic, it compactly presents 12 millennia of Lithuania’s past in an easy-todigest (and appreciate) format. I am one of those who becomes eye weary after an hour or so in a museum, This doesn’t happen here, since an hour to an hour and a half provides just enough time to view all the exhibits without rushing. No “museum-itis”.

There are two halls. The first is devoted to the ten thousand year period from when the first peoples appeared in Lithuania to the birth of Christ. The exhibition begins with a synopsis of the Paleolithic period (11th to 9th millennia B.C.) when the last glaciers receded, lakes formed, and the first bands of hunters reached southern Lithuania. They were following herds of reindeer. They established short term camps, lived in small family groups, and searched for flint to fashion in to ‘ knives, scrapers, hatchets, and other implements.

The Mesolithic period (8th to 5th millennia B.C.) was a time of postglacial warming. Hunters looked to forest wildlife as reindeer began to disappear, fishing grew in importance, and flint-working became increasingly sophisticated. On display from this period is the Duonkalnis “shaman’s” grave from northwestern Lithuania. A young man, obviously important to his tribal group, was buried together with a woman in a grave sprinkled with red ochre beside a ritual hearth also sprinkled with ochre. His body was adorned with 57 amulets including moose teeth strung across his head and wild pig tusks on each of his eyes.

But most of the exhibits in this first hall are devoted to the Neolithic period (4th to 2nd millennia B.C.) when ceramic production grew, bronze items were manufactured, and stone was worked. Exhibits in this section are grouped around five areas: hunting, household, fishing, agriculture, and art. I was amazed at the wide variety of animals Neolithic man hunted in this corner of Europe: moose, aurochs, bison, elk, lynx, bear, wolves, even seal, using just bows and arrows or spears. There are also lovely examples of 5000 year old pottery as well as pieces of linden bast netting used to catch lake fish. But what most interested me were ancient talismans made of wild animal teeth (usually moose, elk, and bear) with drilled holes and ornaments fashioned from amber washed up on Baltic coast beaches. Lithuania and its Baltic neighbors, Latvia and Estonia, have always been known for their amber — in fact, in Lithuania today amber is called “Baltic gold”. It is fascinating to realize that even 6000 years ago amber was prized and widely traded with neighbors.

One final corner of the first hall is dedicated to the Bronze and early Iron Age (2000 B.C. to the birth of Christ) when hill forts atop summits began to proliferate throughout Lithuania. It is estimated that there were once 1000 hill forts scattered across the country, built to protect inhabitants and livestock from marauders.

The second hall focuses on Lithuania from the time of the birth of Christ to the unification of tribal groups under Mindaugas in the 13th century. There are two parts to this portion of the exposition. There are displays on the development of life during this 1200 year long period: economy and trade, agriculture, metallurgy, weaponry, ceramics, spinning and weaving, silver working, and horses (some of the tribal groups buried horses together with slain warriors). Especially interesting to me was the model of a medieval Lithuanian castle (making it easier to visualize what the Upper Castle on Gediminas Hill looked like 600 years ago) and the hoard of 34 silver items discovered in 1957 by a farmer plowing his field. The silver brooches, bracelets, necklaces, and ingots were apparently hidden 700 or 800 years ago, probably in anticipation of tribal warfare or in fear of marauders.

But even more interesting was the ethnic tribal portion of the exhibit. By the 5th century A.D., there were nine identifiable ethnocultural areas or tribes in what is present-day Lithuania: Lithuanians, Upland Lithuanians (Aukštaiciai), Samogitians or Lowland Lithuanians (Žemaiciai), Lamatians, Scalvians, Curonians, Samigallians, Selonians, and Jotvingians. Over the course of eight centuries, these tribal groups melded into each other or allied themselves to form Lithuania. This new m id-13th century state grew within a period of less than 200 years from a unified group of tribes under Mindaugas to one of the most powerful states in Europe under Vytautas the Great (1392-1430). Its territory extended from the Baltic Sea to the Black Sea, encompassing portions of what is now Russia,Belarus, Ukraine, and Poland.

Each of the nine tribal groups is represented by an exhibit with mannequins wearing clothing and ornaments that might have been worn 800 to 1500 years ago. Almost all of the information gathered on these early tribal groups comes from their burial sites.

I couldn’t help speculating, with all my ancestral roots firmly planted in Lithuania (all my forebears are Lithuanian), how my mother’s Selonian ancestors from northeastern Lithuania might have merged with my father’s Semigallian ancestors from the north central portion of Lithuania, and how these two groups finally merged into the dominant Lithuanian tribal group. Here I am — 700 years and more after all this merging — a Lithuanian American.

The Archaeology Exposition is located at 3 Arsenalo gatve, five minutes from Vilnius Cathedral and right next door to the National Museum of Lithuania. It’s open from 10 to 5, except Monday and Tuesday. There is a modest admission charge.

As on our last trip to Vilnius two years ago, we stayed at the Mabre Residence Hotel located at the edge of the Old Town. Built around a lovely green courtyard, the Mabre occupies what was once an Orthodox monastery. Don’t be deceived by the word monastery; the Mabre’s rooms are far from monastic.

We flew SAS from New York to Copenhagen and then on to Vilnius.