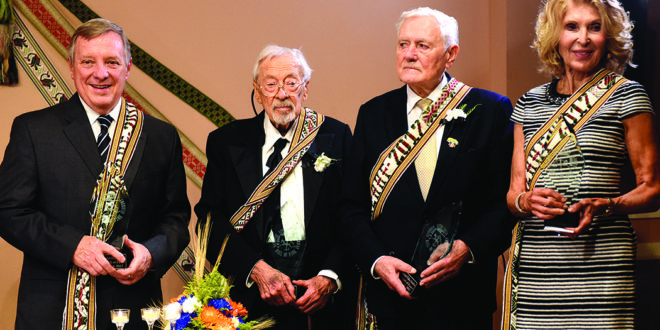 AN INTERVIEW WITH President Valdas Adamkus

Our Draugas corres­pondent, Vitalius Zai­kaus­kas, met up with President Adamkus in Lithuania and engaged him in a candid conversation about his legacy, the future of Lithuania, and its ongoing struggles.

President, we meet again after some two years. Presently we are commemorating Lithuania’s Independence Day this month. Do you have any observations which you would like to share with our readers on this occasion?

February 16 rekindles our determination which we have maintained over these last three decades since we reestablished our independence. The solidarity which our people have manifested is a source of hope and a conviction that our future is not hopeless. The flame of idealism still burns in our nation. And this sustains us. I note that we have returned to the idealistic vision of February 16, 1918, which provided us with the foundation for our decision of March 11th 30 years ago to again proclaim our freedom. This 16th of February restored my faith in my people, and I now envision a bright future for our country, which I believe will play a beneficial role on the global stage as well. I am truly happy. Even the sky was favorably disposed for our celebration this year – the spring-like sun shines upon us.

Accept our congratulations on your most recent award that was bestowed upon you by the Illinois Institute of Technology.

Thank you very much. I must admit that it was wholly unexpected. It was, in fact, quite a surprise. This award, sponsored by IIT, the home of many distinguished scholars including Nobel Prize recipients, gave us the opportunity to once again present “Lithuania” at an international level in the halls of academia. It would appear that I am the first Lithuanian inducted into the Hall of Fame of this institute, my alma mater. Of course, I very much regret that because of my health I had to forego personally attending the event. Although I feel well, I had to comply with the directives of my doctors.

On the same occasion I have to note that the Rector of Vytautas Magnus University in Kaunas, Juozas Augutis, having learned about this award, wrote a letter to the President of the Institute of Technology of Illinois inviting him to Kaunas, to establish a link between these two academic institutions and to then replicate the awards ceremony in Kaunas.

Do you often recall your student days?

Very often. It was a difficult time for me. Upon arriving in the United States from Germany many refugees, as did I, worked in factories. After two months of such work, I decided to better my life through education. At that time I still lacked a good command of English. I began taking evening courses combined with an English language program. It took me almost six years to receive my diploma instead of four. Most of my studies consisted of night courses which I attended after putting in a full day’s work. Only in the final year, thanks to my wife Alma, was I able to complete my studies on a full-time basis.

My degree in engineering opened the door to new opportunities. Besides studying engineering, I also studied ecology and fields related to it. This later turned out to be very useful in my career. One day everything changed when I received an unexpected phone call from the office of Senator Everett McKinley Dirksen, the legendary figure in US political life, and close the friend of President Dwight Eisenhower. The senator’s secretary called and asked me to come to Washington to meet Everett Dirksen. As I said, this call was unexpected, and it wasn’t even clear why I was being summoned to the nation’s capital. Anyhow, I came to Washington and there met with the Senator.

The meeting lasted for about an hour. He informed me that the United States is developing a new ecological program later to be entitled the United States Environmental Protection Agency (US EPA), but the US lacks specialists in this field. “I invite you to join the federal service,” he said. It was such a surprise that I didn’t know how to respond. I cautiously pointed out to the Senator, “Mr. Senator, I do not yet have sufficient expertise in this area, and perhaps I also lack theoretical knowledge of the subject matter. I would hesitate to assume such a responsibility.” But he wouldn’t relent. He just did not let go. It seemed to me that he was even growing impatient because of my indecisiveness. I will never forget his words – they still ring in my ears today. He called me a turkey and went on to say something to the effect: “When something in the federal government goes awry, it is said that the politicians are responsible because they are foolish and ignorant; they don’t know what to do, but when I appeal to intelligent young professionals they decline to serve the state.” I was taken aback by his comment. In the presence of that legendary figure of politics, all I could muster in response was: “Dear Senator, let me think it over and consult with my wife. We were only recently married. After all, this is a weighty proposal.” “Okay,” he replied, “let’s meet in several weeks.”

After returning to Chicago, I consulted with Alma. She said, “How can you say ‘no’ to the senator? Agree!” Following my wife’s sound advice, I informed Senator Dirksen that I would assume the assignment. It turned out to be a 27-year commitment. I was part of the first staff of the EPA and laid its foundations. Five of us set up the basic structure and established how it would fit in the federal system. We then divided the country into ten regions. That is how I became the Deputy Head of the Great Lakes Region, the largest one in the system, and ultimately its Chief Administrator.

Several years later, President Richard Nixon appointed me to the US delegation to prepare the first cross-border agreement on ecology between the USSR and the US. I was then selected to head this delegation.

Looking back, I must say I am pleased and rather proud of the goals that I have accomplished over the years. During that time public perceptions and attitudes started to change concerning the environment; the body politic began to recognize the importance of air and water purity. I am glad that I was able to contribute to sustaining the ecological life of the US.

During Soviet times I was commissioned, within the framework of cooperation, to oversee and manage environmental projects in the Baltic countries. When I first traveled to Lithuania, it was evident that its understanding of ecology was still rather primitive. I am now content with its current environmental protection system. The methods I developed in the US have been highly successful. It’s gratifying that so many years ago a fresh-faced graduate of the Illinois Institute of Technology set out on an eco-friendly course which eventually came to fruition. I guess, in retrospect, I should not be surprised by this recognition by IIT considering the varied noteworthy accomplishments in which I was involved in over the years. I genuinely feel honored.

Mr. President, what is your view about the current developments in Lithuania? How do you value them?

I see a dynamic situation. We certainly can’t say that everything is bad or very good here. It is sometimes painful to witness what is happening in the public and political spheres. At times it seems difficult to justify some of the political decisions that are being made. With all respect for the Parliament (Seimas), there are people there now who have no clue as to what is going on, or even how they arrived there. Unfortunately, the results of their work confirm this. They should focus on the most critical issues for Lithuania: education, health, and social concerns. They are still unresolved and can one day explode. Also, there is still, unfortunately, a great deal of dishonesty on the part of officials, and at times I notice a disdain for democratic ideals. However, there are also some positive manifestations as well. It is vital that we maintain the fundamental principles of democracy and not stray from them. Lithuania has talent; I do not doubt it. This is evident in the many achievements of our younger generation. In some cases, they have achieved significant results even on a global scale. We have much to be proud of.

What would you say about the current Lithuanian foreign policy?

I think we are on the right track. Our eastern neighbor has never been a good one. In surveying the millennium-long history of Lithuania, we will find more bad manifestations from that country than good ones. Our relationship with the US, however, is entirely different. The US has always been a beacon of freedom for us. Our foreign policy is based on Western values and ideals which we must follow if we want to belong to the Western world.

The situation with our eastern neighbor is regrettable. Lithuania seeks respectful and trusting relationships with neighboring countries that are based on democratic principles. We are not a country that would threaten Russia. Developing a healthy relationship with it depends not so much on us, but on Russia itself.

Were there any turning points in your life?

My commitment to the Lithuanian cause was confirmed back in 1940 when I was a second-year student at the Aušra Gymnasium in Kaunas. The Red Army had just occupied Lithuania. At a school assembly, pro-Soviet speakers were extolling the Communist government and denigrating the “bloody Smetona regime.” After hearing this, the entire student body spontaneously erupted in an outpouring of whistles, boos, and catcalls. The organizers panicked and cranked up the Internationale – the Soviet national anthem on the phonograph. We responded in turn by resolutely singing Lithuania’s national anthem “Lithuania Our Homeland”! The windows of the Aušra Gymnasium were open. Our school was situated proximate to the main street of Kaunas, Laisvės Alėja (Freedom Avenue). Thus our voices carried over Freedom Avenue, and all over Kaunas. We stood at attention and sang. I recall the tear-stained faces of our teachers standing beside us. And today, when I remember the events of that day my voice trembles. At that moment I clearly understood who I was, what I must stand for, what my ideals are. I have been loyal to them all my life. (A long silent pause)

And I am grateful for the fact that I grew up in such an environment. I fondly recall my classmates, Gabrielius Žemkalnis and Liūtas Grinius, son of President Kazys Grinius. My entire life in Lithuania and the United States of America has been dedicated to the struggle for freedom of Lithuania, promoting its interests, and keeping its name alive in the free world. I am happy that I was able to return to Lithuania and, as long as my health cooperates, I will continue to contribute to the advancement of a new and free Lithuania.

The interview was translated from Lithuanian by Draugas News.

Previous Growing up Lithuanian on a Tobacco Farm. An interview with Sigita Bersėnas Balzekas
Next The Reconsecration of the Church of the Annunciation. The Brooklyn church has served the Lithuanian community continuously since 1914