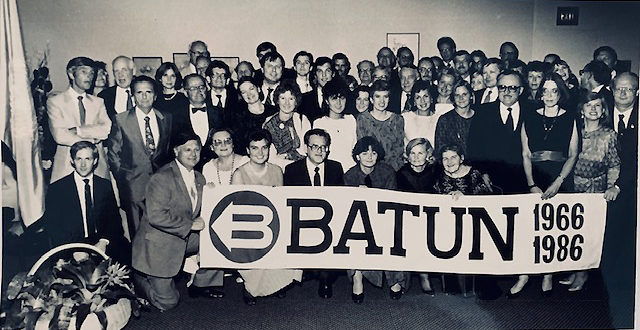 BATUN’s 20th anniversary celebration at the UN in New York. Gintė Damušis is in the second row, 7th from the left.

BATUN – BALTIC COOPERATION IN EXILE. How Baltic Americans banded together to stir the conscience of the United Nations

February 28, 2019 Books, Culture, Diaspora, Events, History-1900+, Politics Comments Off on BATUN – BALTIC COOPERATION IN EXILE. How Baltic Americans banded together to stir the conscience of the United Nations 2,379 Views

We, Baltic Americans, victims of World War II and its aftermath, were steadfast in our resolve that one day we will be able to return to a free Estonia, Latvia or Lithuania – lands that the Soviet Union so ruthlessly occupied. We wanted to find a way to realize our “Impossible Dream.” We decided to do it at the highest international level – the United Nations (UN).

Baltic Appeal to the United Nations (BATUN) was founded in February 1966. It was a member-supported, nonprofit organization that received no financial support from any governmental agency. Sporadic funding for special projects was obtained from  Baltic institutions such as the Lithuanian World Community and the Lithuanian Credit Union “Kasa.” Its board of directors was made up by three representatives from each nationality, chosen by the membership. BATUN’s core was made up of volunteer activists from the Baltic community in New York and the surrounding states.

There were at the time and throughout the years in the US a few other joint Baltic organizations, working towards the same ultimate goal. Their modus operandi was different, however, their approach was local – they pressured the US government to take action on behalf of the Balts. BATUN was unique in its international scope; it reached out to all the 100+ member countries of the United Nations.

In 1980 BATUN began receiving documents from the occupied homelands addressed to the UN and the world leaders, which had been smuggled out to the West. Among those was the “Baltic Appeal by 45 Balts,” dated August 23, 1979, endorsed by Andrei Sakharov and members of the Moscow Helsinki group. It asked for the annulment of the Molotov-Ribbentrop pact and restoration of independence in Lithuania, Latvia, and Estonia. BATUN delegates delivered the documents to Geneva, creating considerable interest among the participating delegations at the Commission on Human Right and the international press.

When in January of 1983 the European Parliament in Strasburg passed a landmark resolution, impelled by the “Appeal by 45 Balts,” formally proposing that self-determination in the Baltic countries be brought to the attention of the United Nations, BATUN decided to widen its activities and hired a Swedish-Latvian lawyer to lobby the European foreign ministries.

By the mid-1980s the world finally took notice of the Baltic issue. One after another, European countries and institutions started demanding justice. In January 1987 the influential Council of Europe adopted a resolution, demanding action from the UN regarding self-determination for the Baltic people. BATUN organized a series of visits to key European foreign ministries in 1989, and in NYC the delegates visited all the European Community (EC) ambassadors, to push for a strong joint resolution on the matter. At that time there was already unrest in the Soviet Union, and the Balts were taking advantage of the situation, demanding freedom. The August 23, 1987-88 demonstrations in the Baltic capitals stimulated independence movements in the homelands. 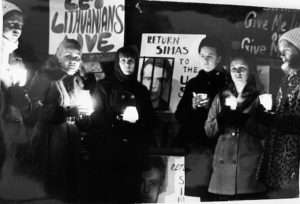 BATUN’s cooperation with the Baltic homeland leaders began in April of 1989. By summer, BATUN had met with representatives of the Lithuanian Sąjūdis, and the Estonian and Latvian Popular Fronts. They all authorized BATUN to disseminate their views and documents, and it was agreed to establish a collaborative effort at the UN. Beginning July 1989, the Baltic leaders accompanied BATUN delegates on visits to the UN missions in New York. I remember distinctly the visit I conducted to the Mission of the Federal Republic of Germany with Prof. Vytautas Landsbergis (at the time he was the head of Sąjūdis). We asked for their support to obtain a joint EC statement on the Balts’ right for self-determination. Our host, a high German diplomat, was very much aware of the importance of the upcoming 50th anniversary of the Molotov-Ribbentrop Pact in 1989 and Germany’s part in it.

By January 1990 some 11 political leaders from the homelands, among them the future presidents of Lithuania and Estonia (Vytautas Landsbergis and Lennart Meri), accompanied BATUN delegates to at least 40 visits to the missions of Western countries, especially the EC ones. BATUN also helped arrange visits for the leaders to the UN Secretary General’s office to deliver documents from the Baltic Assembly.

In October 1990, after meeting in New York with the three Baltic foreign ministers (Saudargas, Meri and Jurkans), it was decided to set up weekly telephone contacts with BATUN for quick dissemination of information.

The failed August 1991 coup d’etat in Moscow opened the way to de facto independence. The Balts seized the opportunity and met the challenge. The world was now ready to grant diplomatic recognition to the three independent Baltic countries.

While the recognitions were pouring in, BATUN began to focus on admission to the UN. On September 17, 1991, Estonia, Latvia, and Lithuania were among seven independent countries to become members of that august organization. On the following day, BATUN organized a formal reception at the Polish consulate in New York in honor of the three new UN member states. In attendance were the Baltic heads of state and their team members, Baltic diplomats in exile, diplomats from European countries, the mayor of NYC, and other prominent personalities.  For us at BATUN, it was a long dream come true, a historic moment to savor. Eight BATUN members were invited to become diplomats of their respective countries at the UN.

THE STORY OF BATUN by Estonian-born Sirje Okas Ainso is a retrospective compendium on a unique aspect of the struggle for Baltic independence. It was published in the US in May 2018 and was presented the same year at the Association for the Advancement of Baltic Studies (AABS) conference at Stanford University in Palo Alto, California.

The book is a hard-cover volume consisting of some 256 pages – including 40 pages of historic photographs and 90 pages of documents. It presents a chronological account of 25 years of persistent and coordinated effort, led by a small group of idealistically motivated Balts, to raise the unresolved Baltic Question – the continuing illegal occupation of the Baltic countries by the Soviet Union – at the United Nations. The nongovernmental organization which they established to attain their goal was BATUN – Baltic Appeal to the United Nations.

On the whole, Baltic cooperation in the Western world after World War II has not been well documented. Not enough attention has been paid to the worldwide multifaceted joint Baltic pro-independence movements in exile. This book in part fills the void.

For 25 years BATUN was the Baltic conscience at the UN. It kept the Baltic issue alive at the highest international level, where there was no one else to champion the cause. BATUN’s long-time lobbying efforts expedited the admission of Lithuania, Latvia and Estonia to the UN in 1991.

The Story of BATUN is well worth bringing to the attention of the public at large now, on the Baltic countries’ 100th milestone, their respective declarations of independence in 1918. It’s a story of faith, hope, and perseverance.

The author, Sirje Okas Ainso, grew up in exile in Argentina, where she graduated from the University of Buenos Aires.  In 1968 she emigrated with her family to the US. She joined BATUN in 1969, becoming an activist, board member and delegate to the UN missions in New York and to the Commission of Human Rights in Geneva 1985-1987. A worldwide exhibiting artist, multicultural and multilingual, Sirje now lives in Miami, Florida, with her husband Heino.

Previous They came from Vilnius. Digging for Hidden Treasure Finding Lithuanian markers across America
Next Growing up Lithuanian on a Tobacco Farm. An interview with Sigita Bersėnas Balzekas