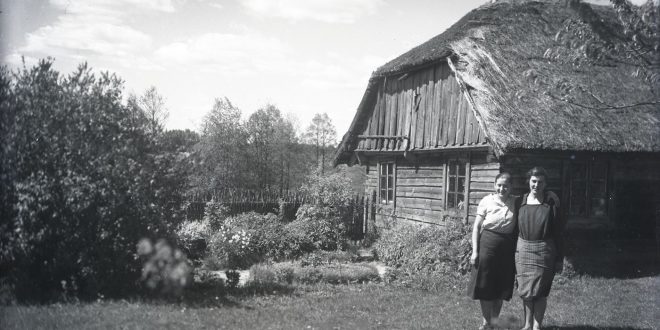 Bestselling author Gediminas Kulikauskas: Publishing is like a lottery

There are books that are so riveting that you just can’t put them down. Two books by Gediminas Kulikauskas, Contraband of Oranges and The Lithuanian Code, both bestsellers, are among my favorite reads. Their author, who also wrote, Electricity Boycott and The Republic Against Moscow, spoke with Draugas News about his literary successes, general cultural quests, and those of his own.

How is it that you, a historian by profession, became a bestseller writer? I imagine you’ve had that question put to you many times before.

Actually, you’re perhaps the first one to raise the apparent contradiction. (grinning).

Honestly, the opposite is true in my case. I started writing first. Early on, I was already a winner of a competition of young philologists. I participated in various other literary competitions and had my short stories published in the almanac of Lithuanian fiction. When at school, and later at Vilnius University, where I studied history, I would occasionally scribble down a mystery or short story. I did this mostly for fun but also to eke out some extra money to supplement my meager student stipend.

It was then that I realized that many history books are thick bricks and a bore to read. Thus it became apparent to me that these authors not only subjected themselves to torture in writing them but would unwittingly torture their readers, as well.

Your readers appreciate your story-telling ability, which is easy to read and maintains the reader’s attention throughout the book. Is this a God-given gift or the result of scrupulous editing?

I am genuinely amused to hear that. I reckon that, for the most part, it is due to the freedom I have – I am not bound by any commitment to any university. I have the privilege of writing whatever I find interesting and in the way I want to. Since I do not have any academic pretensions, I can write in ordinary people’s language, which, at the end of the day, prevents my books from cramming up the bookstore shelves with what I call academic junk.

I am, however, sincerely grateful to my book editors, particularly to Regina Katkevičienė from the Tyto Alba publishing house. I do not think I tired them out with my texts.

Two of your four books are blockbusters I mean, Contraband of Oranges and The Lithuanian Code. To what do you attribute their success? Did their success surprise you?

As I mentioned, I had my fiction published in various publications, mostly in Verslo Klasė magazine, edited by the late Aurelijus Katkevičius. I noticed that the readers were hungry for historic fiction. But yes, the fact that the two books would require four and five reprints respectively was indeed a surprise to me, a pleasant one, I must confess.

As for their success, publishing a book is always a bit like a lottery. You send it out into the world, not sure how it will be received. The thrill is there, though. On the other hand, I do not pander to my readers. Contraband of Oranges is sort of a hodgepodge, with a variety of themes thrown in. Even being aware that the mishmash can turn away some readers, I began the narrative with the section on the battles for an independent Lithuania and the role of farmhands in them. I found it fascinating to write about that, and I did not even for a moment consider how the readers will receive it. Nevertheless, while writing the book, I always reminded myself that I was writing the book for the readers and not for myself.

Which of your books is your favorite?

You are asking a father which of his children he loves most? (grins).

Contraband of Oranges was my first book – in fact, one of the first of its kind generally, which addressed the daily lives of interwar Lithuanians. Since then, it has admittedly lost some of its edge and uniqueness.

What I like about Electricity Boycott – the book has vanished from bookstore shelves, believe it or not. It covers various themes – an electricity boycott in interwar Kaunas, crow eaters in Nida, and our ancestors’ attempts to predict Lithuania’s future are just a few of the presented subjects there.

As for The Republic Against Moscow, I attempted to introduce my fellow countrymen to the Two-Nation Republic period (Lithuania and Poland), particularly regarding 16th-century battles against the Muscovites. We do have some authentic dramatic historical stories to tell in Lithuania, exceeding even the Three Musketeers in their drama.

But yes, it is The Lithuanian Code the which remains most popular, perhaps because it is most audacious. It is different from my other books about interwar Lithuania and Lithuania’s historic periods. When I began the book, I had the gut feeling that contemporary Lithuanian nerves are tough enough to cope with what I call “larger portions” of historic “salt,” which is abundant in the book.

So how do you characterize the average Lithuanian from one century ago?

Extremely tired, hardly making ends meet, living on the edge of poverty and looking for a way out of the situation. The Lithuanians lived in an era of historic shifts when the world was changing rapidly; hence the Lithuanians realized the need for change. Just remember that a peasant born around the 1890s lived through some notable historic events; he lived under the Russian Tsar, the German Emperor (Kaizer), President Antanas Smetona and the Soviets. In recent years, the world has also been through some significant shifts – an exciting time awaits us!

Having read your Contraband of Oranges and The Code of the Lithuanian, I left with the impression that during the Tsarist era and the Independent interwar period, Lithuanians were mistrustful, valued land ownership and their entrepreneurship would boil down to engaging in contraband. Am I correct?

Simplistically viewed, yes. But not entirely, though. Since the abolishment of serfdom in 1861, rigid customs began to relax. The entrepreneurial spirit rose – Lithuanians started to compete with the urban Jews, who were prominent in local commerce and trade. Gradually the rural Lithuanians began moving to the cities, although, roughly speaking, Lithuania, for the most part, remained a single large village.

Yet modernity was tangible. In agriculture, the iron plow replaced the wooden plowshare; farmers welcomed the new threshing machine; daily life was improving with every household being able to buy more utensils and goods. Hygiene improved. Standards increased across the board.

If Lithuania had had several more decades of independence, it would have caught up with Denmark in terms of development. Alas, it was not meant to be…

How much did the Lithuanians differ from, say, the Russians, the Poles or the Germans?

Much can be said about that, but I’ll reply briefly – a lot and not so much. The difference was the starkest in comparison with the-then Germans who would look with disdain at Lithuanians, calling them pejoratively “scruffy Samogitians.” Yet, at the same time, they would eagerly buy butter and sausages from the Lithuanians in the Klaipėda market.

Twenty-first-century man can’t imagine life without a Samsung or Apple cell phone. What were the gadgets that the late 19h century and early 20th century Lithuanians took particular pride in ownership?

An iron plow, a radio set, a lightning rod on the house, subscription of one or more newspapers. A pair of new shoes, a gramophone, a good watch on their wrist, as well as a mouth organ. A bit later, they took pride in electric power at home, a motorcycle, a modest car, and in cities – a landline phone.

At the Aštuonratis Museum in Nemakščiai in the Raseiniai District, I came across a pair of interwar American shoes, made from bison leather. A son who emigrated to the United States had sent them to his father here. The parent was so proud of them that he would carry them instead of putting them on. The father purportedly died with the new shoes at his side, not ever having walked in them.

Would our ancestors find a common language with modern-day Lithuanians?

Of course. Both would rail at the bad weather, the authorities, the prices and the pay they receive. Both would touch on the season’s haul of mushrooms, berries and potatoes. The modern Lithuanian would treat the old-era Lithuanian with a bootleg Belarusian cigarette, and the latter would pour a glass of Prussian contraband alcohol for the former. But both would eventually start quarreling over some trifle – be it some monument, a plaque, should it stay or not. And about the writing of Lithuanian letters – should they be written with diacritical marks or not? That would undoubtedly be a bone of contention. (grins).

I’ve recently read that besides writing, you’ve been mining the Internet with some of your colleagues in search of unique photographs from interwar Independent Lithuania. How is this project progressing?

Indeed, this is something we’ve started, but it is more than a one-shot initiative. It is an attempt to bring together similarly-minded collectors for a concrete task – to acquire and preserve culturally and historically significant photos.

For instance, last summer, I came across an online auction featuring a set of World War I-era photos, all of them incredibly beautiful. Most of them depicted Vilnius and the lives of its then residents.

Those who had seen them (posted on my Facebook page) agreed that they should be obtained and preserved either at the Lithuanian Archives or Lithuania’s National Museum.

But we understood that it was a long shot to procure them, considering that various states and ethnic communities view Vilnius as their home and thus, many bids were expected. Furthermore, the auction was about to end; there was little hope that Lithuania’s cultural institutions could manage on such short notice to participate in the auction and thereby obtain the photos.

As we were becoming despondent, a suggestion was made – solicit individuals to sign up for the auction and buy as many of the photos as possible and then donate them to the Lithuanian Archive or the National Museum.

The noted Lithuanian singer Marijonas Mikutavičius came up with this idea.

Although the photo prices were ridiculously high (in fact, they were exorbitant, and I believe we significantly overpaid) yet we managed to assemble a group of seven people who bought about 90 prints, almost half of the auctioned photos. We hope that they will appear soon in archival repositories in Lithuania.

I am sure you are itching to start a new book. What will it be about?

It will focus on the topic of war history – the heavy armor-led battles in June of 1941. Maybe you heard of the fierce conflicts, the so-called Raseiniai and Alytus tank battles, or the Manšteinas tank raid? While preparing to write this book, I crisscrossed many forests and swamps, which still bare traces of the war. I am also mulling about a sequel to The Lithuanian Code.