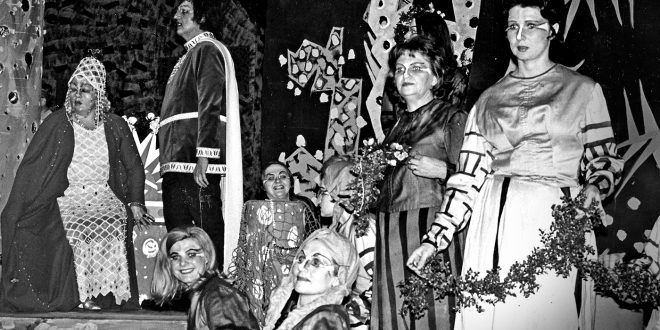 To mark the upcoming centennial of Lithuanian opera, the Martynas Mažvydas National Library in Vilnius, in cooperation with the Balzekas Museum of Lithuanian Culture, has initiated a project to digitize the videotapes of Chicago’s Lithuanian opera productions. Cameraman and photographer Aleksandras Plenys undertook the original videotaping from 1984 to 2003. These unique videos encompass a series of performances of Chicago’s Lithuanian opera. Before his death, Plenys gifted his videotape collection to the museum, where they are currently maintained. To make these recordings accessible to the Lithuanian as well as to the broader international community, the digitized material will soon be posted on the Mažvydas website www.epaveldas.lt. The Lithuanian Cultural Council supported the digitization of the videotapes, while video chronicler and filmmaker Arvydas Reneckis, well known to Chicago Lithuanians, executed the project.

The Chicago Lithuanian opera is a unique phenomenon not only in the history of Lithuanian music but also generally in the history of world music. It is the only ethnic opera in exile that has steadily produced and performed operas for half a century. The Lithuanian opera in Chicago was formed after World War II. Its base was the opera theater members, who were forced to flee Lithuania after the Soviet occupation. In 1944 as the Soviet army approached Kaunas, more than 90% of the Lithuania Opera personnel – soloists, choir singers, conductors, directors, orchestra musicians – escaped Lithuania. After several years eeking out an existence in German displaced person camps, in 1947, they rekindled opera production and presented Gioachino Rossini’s Barber of Seville. Subsequently, the opera personnel reunited in Chicago in 1949-1950 and decided to continue to produce operas in exile.

The first opera performed by the Lithuanian Opera in Chicago was Giuseppe Verdi’s Rigoletto in 1957. Since then, over the span of some 50 years, the Chicago Lithuanian Opera staged new productions annually. There were 38 operas performed, some periodically repeated. In addition to the world opera masterpieces by Giuseppe Verdi, Georges Bizet, Charles Gounod, and Gaetano Donizetti, works composed by Lithuanians were also featured. These included works by Julius Gaidelis, Kazimieras Viktoras Banaitis, and Jeronimas Kačinskas. Over the years, more than 560 Lithuanian musicians, including almost 90 soloists, took part. The performances were directed by noted Lithuanian conductors – Vytautas Marijošius, Aleksandras Kučiūnas, Alvydas Vasaitis, and Aloyzas Jurgutis. Stars from the Metropolitan Opera and Chicago’s Lyric Opera, such as tenor Stasys Baras, bass Jonas Vaznelis, baritone Algirdas Brazis, and soprano Danutė Stankaitytė, performed solo parts.

After the restoration of Lithuania’s independence in 1990, the Chicago-based opera company began to collaborate with Lithuania’s production houses. As a result, Chicago’s Lithuanian Opera invited the best soloists, conductors, and directors of Lithuania to perform.

A total of 15 operas and two concerts by Chicago Lithuanian Opera were digitized. The recordings span an almost two-decades-long period. While this era does not cover Lithuanian opera’s golden age when solo parts were sung by Lithuanian vocalists from the Metropolitan Opera or the Chicago Lyric, they nevertheless include opera legends Jonas Vaznelis, Algirdas Brazis, and Aldona Stempužienė. After the fall of the Iron Curtain and the beginning of productive cooperation between the Lithuanian National Opera and Chicago Lithuanian Opera, the nature of the Chicago ensemble changed – soloists from Lithuania were regularly invited. This coalescence into a unified Lithuanian opera is reflected in the 1989-1994 performances recorded by  Plenys. In addition to Lithuanian American opera stars mentioned earlier, we hear the voices of Arnoldas Vokietaitis and Margarita Momkienė, as well as the outstanding soloists from Lithuania such as Virgilijus Noreika, Irena Milkevičiūtė, and Arvydas Markauskas.

The project to digitize this musical heritage presents the Lithuanian diaspora’s cultural life up close. The ability to access digitized operas enables us to appreciate the Chicago Lithuanian Opera’s accomplishments. Although the works represent but a small part of its productions, they provide us with an insight into the development of Lithuanian musical history.

The Balzekas Museum’s project to digitize the Plenys collection of Chicago Lithuanian Opera performances has received partial support from grants awarded by the Illinois Arts Council Agency, the Illinois Humanities,  the Lithuanian Foundation, the Lithuanian Ministry of Culture, the City of Chicago City Arts, among other private donors. The Museum is proud to announce that the Plenys digitization project has been included in the Chicago  (Department of Cultural Affairs and Special Events) “Year of Chicago Music” programming, now extended through 2021. A concert by the Chicago Lithuanian Opera Choir, recorded at the annual Lithuanian Opera Ball in November 1993, kicks off this year’s virtual opera season and has been posted on the Balzekas Museum’s website (balzekasmuseum.org) and Facebook.

Previous Bestselling author Gediminas Kulikauskas: Publishing is like a lottery
Next Thirty Years Ago, Lithuania Faced Its Moment of Truth