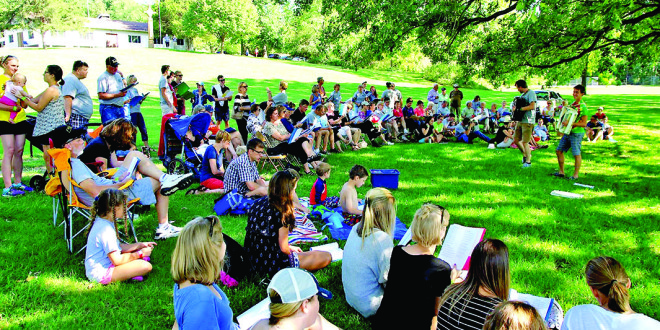 Within five hours of arriving at Camp Dainava, in Manchester, Mich., to mark the camp’s 60th birthday bash this past Labor Day weekend, I feasted on cold beet soup, joined in singing Lithuanian freedom fighters songs, and waided through thorns and thistles to reach the natural springs feeding the camp’s own Thorn Lake, known as Spyglys.

In short, it was what I had been anticipating for months. Anyone who has ever been to Dainava will understand what I mean, and will nod in quiet agreement. Therein lies the contrast between my American life and my Lithuanian life – one is a place where I live and work, and the other is where I thrive. And for almost fifty years, I have thrived with each visit to Dainava. Let me share some of the highlights from this ama­zing celebratory weekend.

We arrived just before noon on September 3rd and stopped at the ‘STOK’ sign where three energetic volun­teers checked us in and issued souvenir T-shirts. Soon, we were raising the United States and Lithuanian flags near the dining hall and proceeding to lunch. As expected, Lithuanian soul food was on the menu. We then had a choice of different activities – swimming, games, chatting, or taking a hike on the nature trail. An old friend of mine, Marius Gražulis, joined in the hike. Marius and I were part of a team that helped to clear a nature trail in the early 1980s. During the hike we noted a memorial to Pranas Pranckevičius , a great supporter of the nature trail and an advocate for Dainava’s natural habitat. Pranas passed away in 2015, but his service and dedication to Camp Dainava will long be remembered.

Later that afternoon, we had a group sing-along under the sprawling oak at the bottom of the hill. I remember that as a young camper, Masses were often celebrated under this very oak. I was so happy that they provided copies of the words to the songs – while I mostly remembered all the songs, having the words let me sing with greater confidence. The songs covered a wide range of topics: nature, love, patriotism, youthful optimism, life-long friends…

From the oak, we made our way up to the Hill of Crosses. Few people may know or remember, that a Hill of Crosses in the late 1970s was started on the other side of the lake, just past the pine forest. It was ultimately decided to establish it at its current location. We gathered there to remember the founders who helped found Camp Dainava. Those in attendance were given a flower or plant stem. As we came foreward we placed the plants in a large basket symbolic of the founders who came together 60 years ago to create this camp.

In the evening we lowered of the flags and proceeded to a grand dinner (more Lithuanian soul food). We had time to prepare for the evening program.

I spent the time reading the results of an online survey that the weekend’s organizers had administered in the previous months. The results were printed on large posters and placed on easels for all to see. About two hundred people had responded to the survey and considered various questions focusing on what were the greatest needs for the future of the camp and how should those needs be paid for. The funniest idea (from a young respondent), was to build a water slide/water park at the lake. The most unexpected serious idea for me was the need to improve the security of the camp during times that kids are camping there. My favorite idea was to install several hot-spots at the camp so that adults would find it easier to stay connected to work while they volunteer at the camp. The most popular idea was the need to improve the bathroom/shower facilities at the main building, the so-called White House.

Highlighting the evening program was the Dainava Men’s Ensemble, led by Darius Polikaitis. While I have read about the group before, I never actually heard it. Well, it was worth the wait. They started off with the resounding “Ramovėnų Maršas” followed with a number of folk and partiotic songs. There was also a Lithuanian version of the Beach Boys hit “California Girls.” During a break in the program we witnessed a colorful fireworks display from across the lake. The show lasted 15-20 minutes. My father commented that they must have spent a lot of money to bring in professionals for such a show. Turns out he was wrong. Like all the amazing things at Dainava – the show was put together entirely by volunteers. The second half of the concert had a mix of songs, translated into Lithuanian, and some English songs. Also, what I thought was particularly nice, was that the ensemble invited other, younger musicians to join them on stage. It was a bridging of generations of musicians.

Sunday also had a packed program. The morning was a review of Dainava: past, current, future. Appropriately, the presentations were done by Juozas Polikaitis (who has been involved with the Camp since its founding) and his daughter Rima Birutienė (who I have known since we were little kids at the camp) who has headed the Lithuanian Heritage Camp for over 20 years. The historical overview focused on the Camp’s founding and its initial years. Literally hundreds, if not thousands, of people came together and volunteered their time to get the camp established.

Pranas Baltakis will be remembered as the man who made the lake swimmable. When the camp property was purchased, local experts determined that the lake bottom was too muddy and the sides were too steep to sustain a beach suitable for swimming. Mr. Baltakis was not convinced. So, that winter, he drilled holes through the ice, took samples and measurements, and basically created a three-dimensional model of the lake. With the model he created a plan. His plan was to drain part of the lake, scrape the mud off the edges, make the beach area a more gradual slope, and then put sand down (there was a natural sand pit on the campsite). The experts took a look at the plan and for the second time said it couldn’t be done.

Like any good Lithuanian, Mr. Baltakis ignored the experts and proceeded with his plan nevertheless. He installed four diesel-powered pumps to lower the water level by nine feet. He lived in a small pup tent for three months to manage the project and keep the pumps operating. The lake le­vel fell, the mud dried and was removed, an excavator evened out the steep sides, and sand was brought in. What was called impossible was made possible by a person who cared. And his reward – the satisfaction of having a beach which has now served us for almost 60 years !

Vacys Lelis is another person I recall from my younger days. He asphalted the roads in the camp, as previously they had been mere gravel roads. He worked in a road construction company and was able to use the company equipment for the project. I can just imagine the conversation “Hey boss – can I borrow this million dollar asphalt spreading machine for the weekend?”

Those and other stories captured how a farm purchased from the University of Michigan by the Lithuanian Roman Catholic Federation of America became the Camp Dainava that we now know and love. What was also interesting is that many of the founders felt that if the camp lasted at least 20-30 years, it would all be worthwhile.

The annual Member’s Meeting took place that afternoon. Attendance was about 50 individuals – something not seen in a long time – with a mix of young and old. The Board of Directors, made up of volunteers, provided an overview of the past year and plans for the future. Some of the plans include implementing the ideas collected by way of the survey. Later in the afternoon, we all came together to celebrate Mass in the pine forest chapel. The celebrant was Fr. Lukas Laniauskas, SJ, who was ordained a priest just over a year ago and celebrated his first Mass at Dainava in June 2015. I had heard many positive remarks about Fr. Lukas, but wondered if this was just hype as he was the first Lithuanian-American Jesuit priest ordained in fifty-plus years. Any doubt was dispelled at the start of his sermon. “Clickety-clack,” he said, “clickety-clack.” In our minds, he created the image of a young woman, who looked out the window of a train. As the train moved forward, clickety-clack, clickety-clack, she saw desperate, broken lives roll pass. When she got off the train, she vowed to make a change. That person was Mother Theresa, who on that same day as our Mass – September 3, 2016 – was cannonized by the Catholic Church as St. Mother Theresa. Father Lukas asked each of us, through what window do we see the world, what desolation do we see around us, and how are we going to improve what we see?

The rest of the day included a slide show, a dance, and a wonderful bonfire. While I’ve only mentioned a few people in this overview, I would like to acknowledge the dozens of volunteers (with more names than ever can be mentioned)who came together to make the weekend possible.

The tradition of volunteering and sacrifice, so vital to the foundation of Camp Dainava, will secure the next 60 years of the camp’s history.

Previous LITHUANIANS ON THE “TITANIC”
Next “I Love Constitutional Law”, a Conversation with Vaidotas Vaičaitis, a 2017 Joseph P. Kazickas Fellow at Yale