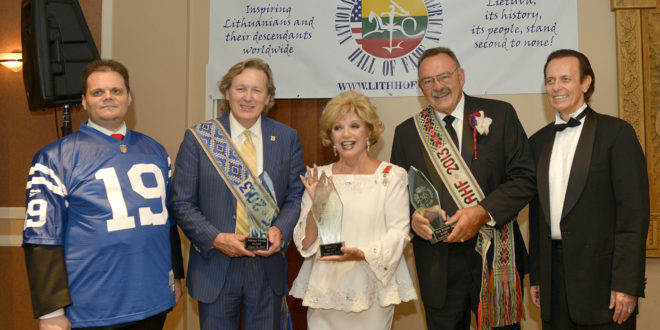 Focusing on the Lithuanian American Hall of Fame

October 10, 2017 Culture, Diaspora, Events Comments Off on Focusing on the Lithuanian American Hall of Fame 6,393 Views

Draugas News spoke with NLAHF founder and president Jon Platakis about the work and goals of this fast-growing civic organization committed to celebrating the lives of legendary Lithuanian Americans and preserving their accomplishments.

So what is the National Lithuanian American Hall of Fame?

The National Lithuanian American Hall of Fame (NLAHF) is an educational and non-profit organization dedicated to acquainting the English-speaking world with Lithuania, its history and culture. We direct our efforts to generations of English-speaking Lithuanians. We endeavor to instill pride in their Lithuanian heritage. I often wonder how fourth and fifth generations of Lithuanians can be proud of their heritage if they have little or no knowledge about the tremendous role Lithuania played throughout history.

What prompted the founding the Hall of Fame?

Generally speaking, the public has very little knowledge about Lithuania and its history. Lithuanians live in relative obscurity within the American community. When you introduce yourself as a Lithuanian, the response you are likely to get is, “You’re a Litha who?” or “Are you Lutheran?” Except when it comes to basketball Lithuanians tend to associate mostly with fellow Lithuanians and focus primarily on Lithuanian causes, leaving the rest of the world behind. Since Lithuanian independence, we are finally coming out of our enclaves and are beginning to live as Lithuanians in an American context. Then, how are we to present ourselves, our nation, our culture to the American public? It occurred to me, why not introduce Lithuania’s history and culture by publicly recognizing distinguished individuals of Lithuanian heritage. So in 2011, the Hall of Fame concept was born. In addition to bringing Lithuanians generally out the shadows of obscurity, its Medieval history especially needs to be brought to light. I’m a history teacher by profession. Over the years, I have read many history books and historical journals about Lithuania and am tired of Lithuanian historians minimizing one of the world’s grandest histories. It is appalling to read outright lies and misinformation about Lithuania’s early history. When we Lithuanians refer to Lithuania as a Grand Duchy, we are regurgitating what is a Slavic, or more directly, a Russian and Polish tradition. After Mindaugas’ death, the crown was never removed from Lithuania by the Pope. Therefore, this royal tradition continued with all of Lithuania’s rulers. The voluminous archival documentation establishes that Lithuania’s early rulers were kings and not mere grand dukes. The royal seals of Lithuanian rulers contained the words, Rex Lituanie. The Teutonic Knights addressed Algirdas and Kęstutis as brother kings. Even the Pope addressed Gediminas as king of Lithuania and many Russians as well. It may be up to the diaspora to take on the burden of disseminating the correct version of Lithuania’s history because, as I have found out, some Lithuanian historians still undermine Lithuania’s history out of fear of that perchance they might offend some of Lithuania’s neighbors.

Who were the first inductees?

Our first inductees were football greats, Johnny Unitas and Dick Butkus. Also, the gracious Hollywood star, Ruta Lee. I find it remarkable that two of the greatest players in the History of Football happen to be Lithuanian.

What criteria do you use to select inductees? Fame? Notoriety? Accomplishment?

You hit the nail on the head. We use all three of these criteria to select candidates for induction. Also, candidates must have a Lithuanian heritage and have contributed, in some way, to American culture. As a young organization trying to make our way into the Lithuanian conscience, we leaned slightly more to the fame side in selecting our first candidates for induction. There are not very many people in America who haven’t heard of Dick Butkus, Johnny Unitas, or Ruta Lee. However, many had no idea that they are Lithuanian. As our organization matures, so will our process in selecting candidates. Although all our inductees are famous and have accomplished much, there are many other potential candidates, who have reached the pinnacle of their professions, and are deserving of recognition.

Who will be inducted this year?

Does NLAHF have a charitable function or a cultural component? What are its broader goals?

Charitable, cultural, and educational. In 2014, with the help of “Jimmy John,” we provided scholarships to students from various Chicago Public Schools. The students were required to write a research paper about some aspect of Lithuania. We also introduced Ruta Sepetys’ novel, Between Shades of Gray into the Cicero, Illinois, and Chicago Public School system.

What has been the response from the public to NLAHF?

We hold our induction ceremonies every two years, as it takes that long to prepare for each event. Public awareness continues to grow. This year, because of the caliber of our inductees, we are receiving additional national attention.

Who serves on the board of NLAHF?

Our number of Board members fluctuates from time to time. Currently, there are 20, representing various professionals: educators, attorneys, nurses, etc. Some of our Board members you may find on our website www.lithhof.org.

When will this year’s banquet and induction take place?

Where can we learn more about the work of NLAHF?

The National Lithuanian American Hall of Fame has a significant presence on social media. Our Facebook page, according to their statistics, has reached as many as 164,000 visitors during a one-week period. Our average is 25,000 per week. We designed our page to specifically attract English-speaking Lithuanians and provide educational, cultural, and historical information about Lithuania. Surprisingly, almost half of our visitors are Lithuanians from Lithuania. Our website, www.lithhof.org, has additional information about our activities.

Previous DETOUR. A conversation with Diana Vidutis
Next Karolis Požėla Proper Gentleman and Champion of the Mat