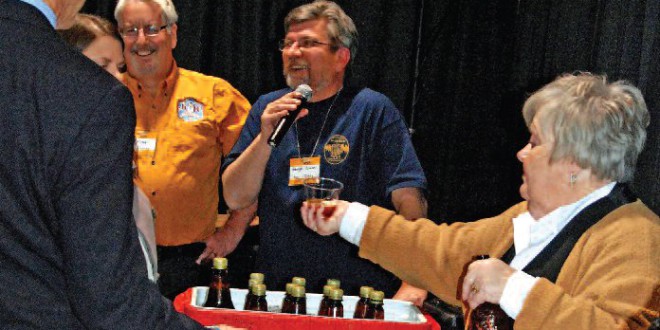 Philadelphia – The City of Brotherly Love, opened its heart to Lithuania this November showcasing a weeklong extravaganza of art, craft, cuisine, music, history, and community events. This Lithuanian Festival, which took place November 2-10, was organized by the Lithuanian Embassy in the United States and the Lithuanian Honorary Consulate of Pennsylvania headed by Consul Krista Bard, to celebrate Lithuania’s ascendency to the presidency of the Council of the European Union.

The cornerstone of the festival was a week-long exhibit of Lithuanian crafts at the 37th Annual Philadelphia Museum of Art Contemporary Craft Show. Twenty-three of the finest contemporary Lithuanian craft artists were invited as special guests to exhibit works in glass, ceramics, textiles, wood, metalwork, leather, and furniture design. Absent were the kitschy amber encrusted paintings and garish factory-woven sashes of the bygone Soviet era. These works were contemporary Lithuanian – fresh, clean, and chic. In gallery talks, Virginija Vitkienė described the works in the context of the present Lithuanian craft scene, while Eglė Deltuvaitė presented a lecture on 20th and 21st century Lithuanian photography.

Kęstutis Vaiginis Quintet performed a Lithuanian Jazz Concert at the Philadelphia Museum of Art. Arguably one of the most talented internationally applauded jazz musicians of his generation, Vaiginis played soprano and tenor saxophones as well as the flute.

The celebration moved beyond the museum to other venues. Chef Michael Laiskonis, creative director of NYC’s Institute of Culinary Education, hosted two evenings of Lithuanian inspired fare. The first was a sit down dinner at the Sbraga restaurant of expertly refined Lithuanian traditional dishes, and the second – a cooking class at the Philadelphia’s COOK, a state-of-the-art, kitchen-classroom where guests come to enjoy chef tastings, culinary demonstrations and cooking classes. Laiskonis prepared dishes reminiscent of Lithuanian foods, whose textures and taste combinations were probably never before experienced by the Lithuanian palate. The menu included: Traditional and “Deconstructed” Borscht, Herring with Smoked Potato, Pickled Parsnip and Carrot, Savory Lamb Dumpling “Cepelinai”, Poppy Seed Beignet “Spurgos” with Huckleberry, and Creme Fraiche Sorbet. Laiskonis, a Michigan native, has spent the past few years researching and rediscovering his Lithuanian lineage, and making multiple trips to Lithuania to experience the food first-hand.

Previous American Lithuanian – Nobel Prize winner
Next Lithuania On the Map: Cartography in Lithuania From the Sixteenth to the Eighteenth Century