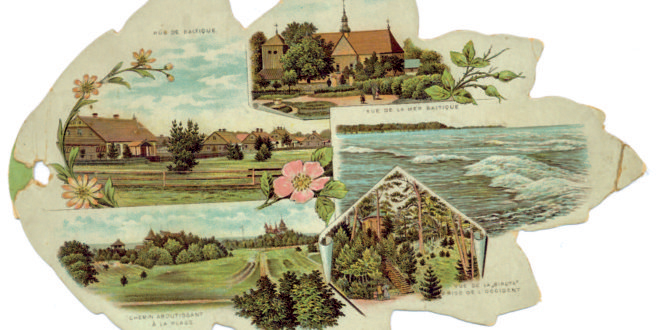 Paulina Mongirdaitė was born about 1865 in Raseiniai county, in the province of Kaunas. Her parents, Sofija (née Griškevičiūtė) and Mečislovas Mongirdas, came from a noble bajoras (boyar) family. Perhaps due to poor record-keeping in the upheavals following the 1863 uprising, her exact birth date and place are not known. She was the youngest in the family, educated in a private pension in Warsaw, where among other traditional subjects, she completed an introductory course in photography. This course of study seems remarkable today not only because of its subject matter, but because a woman – Madame Tleck, was the instructor!

In 1885, the family moved to the town of Palanga by the Baltic Sea, where Paulina witnessed the whirlwind creation and construction of the now famous resort town. This was the time that the grand Tiškevičius manor was being built, parks were being laid out, the beachfront was being adapted for visitors, and the Lourdes grotto at the foot of Birutė’s Hill was being created. Meanwhile, the town center was bustling with the construction of a new synagogue and neogothic-style Catholic church.

Life in Palanga for young Paulina was not easy. She had to care for her ailing parents and nurse her sister who had cancer. The load on her was great, especially since she was the sole breadwinner for the family. The gardens and animals kept at the Tuhanovich villa –the family property, provided food for the family, but brought in no income. For a while, the women supplemented the family’s finances with sewing and renting rooms to summer vacationers, but eventually Paulina found a better long-term solution.

Paulina was an impressive personality: she had a very strong character and was not afraid of innovations, she smoked cigarettes and wore sporty clothes. Her innate artistic talents had many creative outlets: she liked to sew and embroider and was an accomplished artist, creating memory albums and drawing miniature scenes of Palanga from nature. She had a beautiful natural soprano voice and accompanied herself on the piano. Paulina’s bright and active mind was always busy – she read widely and had many interests and hobbies. Family members and neighbors alike were fond of her and called her by the nickname –Polė (Polly).

Around 1889, Paulina Mongirdaitė opened a photography atelier – the first in Palanga. After the 1863 uprising against tsarist rule, all cultural activity required permits from the Governor general. Records in St. Petersburg indicate that Paulina Mongirdaitė was first granted permission to work in art photography on Nov. 28, 1892 – several years after her studio opened. Undated, but historical photographs verify that Paulina was actively photographing before 1892 – perhaps unofficially, perhaps with the assent of the local police chief.

Until Paulina Mongirdaitė established her studio, the photography needs of the town’s residents and vacationers were fulfilled by visiting photographers from Telšiai. While the service was adequate, it was inconvenient, since customers waited to receive their finished photos by mail. Now the first woman photographer in Lithuania could provide the service locally. Mongirdaitė worked from dawn to dusk, winter and summer, on weekdays and weekends. She often worked at night, closing herself off in a darkroom to develop negatives. During the day she would take photographs, fill out invoices, hurry to keep everything on time. She taught photography skills to young Jewish women from the town in exchange for assistance with her work, and during the summer season invited young men from Warsaw as helpers.

Her place of business in Palanga was a small, wooden house on the larger Mongirdas property. It was set far back from the street, behind the larger main house. A dark anteroom led directly to a narrow photography lab. To the lab’s right, was Paulina’s bedroom, which often doubled as a workroom; on the left was a room for receiving guests. Directly off this latter room was a glassed-in photography studio. Lacking electricity, the studio was illuminated solely by natural light coming in through a glass ceiling and wall. Available daylight determined the narrow window of time when photography was possible. As photo subjects were required to pose motionless for 10 seconds, the studio provided chairs and various supports.

The process leading to a finished studio photograph was long and labor-intensive. Lighting and decorations needed to be arranged, glass photographic plates readied. After the photos were taken, chemicals were prepared, negatives retouched, images developed and fixed, printed on photo paper and dried. Because the paper used for photographs was so thin and fragile, the delicate photos were glued with rice starch onto special photo cards, which were often gilded or fancifully decorated. The cards were stamped on the reverse side with the photographer’s mark. Once the glue had dried, the photo itself was retouched, pressed, and parchment protection sheets were glued on. Only then was a photo presented to the client.

Out of great respect for her family’s roots, at one time Paulina Mongirdaitė stamped her finished photographs with a seal that joined two elements from her father’s family history: the word “Wadwicz” (fish) from the ancestral Polish coat of arms, and the family name “Mongird”.

This seal misled some later researchers into thinking that “Wadwicz” was a first name. As a result, several photographic publications erroneously attributed photos with this stamp to a male photographer named Vadvičius Mongirdas. No such photographer ever existed. The seal belongs to Paulina Mongirdaitė. At present, 10 other variants of the seal which Paulina Mongirdaitė used to sign her photographs have been identified.

Studio portraits and cartes-devisites, were only part of Paulina Mongirdaitė’s work. Her talents were recognized by the count Tiškevičius family who commisioned many family photos. She often worked on location and captured moments of everyday life in neighboring towns and environs, photographing farmers, families, local Jews from villages, soldiers working in the customs offices. Travelling in a one-horse carriage, she took photographs of border stations and summer vacationers on the dunes. In her photos she used contrasts and shadows to add emotional depth, and often included a tiny figure of a person in an otherwise anonymous view of nature or architecture. The fragments of life recorded in her photographs have an almost anthropological dimension.

From 1902 to 1912 she also published many historically themed postcards, popular in current-day Western Europe. Some featured redrawn portraits of the grand dukes of Lithuania – Vytautas, Gediminas, Kęstutis, Algirdas, Švitrigaila. Later photographers republished some of the postcards. For example, during and after the First World War, R. Schmidt, a publisher from Klaipėda, circulated a postcard depicting a panorama view of Kretinga from Pelėda Hill. No attribution is made to Paulina Mongirdaitė, but the photograph is found on page 26 of her published album “Kretynga” (compiled in 1890) and is the oldest known photograph of the city of Kretinga. For a long time it was thought that “Kretynga” was the only existing photo album of her photographs, but now six collections/albums of photographs and 13 glass photographic plates are known.

Even though Mongirdaitė is best known as a photographer, one of her first publications was not of photos, but a book of graphic art. Around 1892, early in her career, she published a small (4¾ x 6½ in.) album of lithographs in French titled “Polonga Bains de Mer” (The Beaches of Palanga). She signed it “M. Pauline.” The album has an unusual shape: seven connected oak leafshaped pages open up like a fan. Between the front and a back covers, the five inside pages, linked by floral ornaments, display 25 scenes of Palanga in colored graphic drawings. Paulina was not only an artist and entrepreneur, but also an active community member. She raised funds for construction of a church in Palanga, photographed the restoration process of a church in Kretinga and advertised the Lithuanian seacoast in the foreign press. In her studio in 1899, she photographed the group of actors performing in the first Lithuanian play –“Amerika pirtije” (America in the Pirtis). For many years, a postcard with this photograph served as an emblem of Lithuania’s national reawakening.

Janina Vrotnovska, the daughter of Paulina’s sister Sofija, lovingly reminisced in her memoirs: “We used to take walks, relax and play, while aunt Polly worked late into the night, because vacation season was the best time for taking pictures, and her assistants worked only part-time. I remember that aunt Polly hardly ever joined us relaxing in the garden, she rarely went swimming in the sea or enjoyed music in the evenings. And yet we were all living off her earnings!..

“Until I turned 12 and got my own room in the old house, during summer vacations I lived with aunt Polly in her little house. We used to lie in our beds while auntie read aloud. I remember the stories of Jules Verne, books about travel and adventures in exotic lands. These readings often lasted late into the night. The table by the bed always had sweets on it. What my mother would have said, if she had known! It was our secret.

“Often I promised myself that when I grew up and had my own house, I would take auntie to live with me, so that she could rest from her work, go to the theater she loved so much, go to concerts, read books. Unfortunately, I was unable to fulfill this promise. Life deprived this woman of so much that she deserved…”

Paulina Mongirdaitė was a pioneering, courageous, talented woman who devoted her life to photography. According to church records in Palanga, she died of cancer on November 5, 1924. She was 59 years old –her photographs however, remain timeless…

Translated from Lithuanian by Rimas Černius.