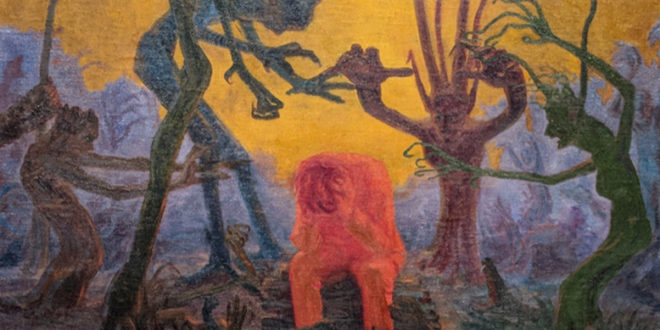 While wandering through the beautiful Impressionist galleries at Musée d’Orsay in Paris this spring, I was thrilled to discover the museum hosting a very special exhibition “Wild Souls. Symbolism in the Baltic States.” As an American artist whose father was Lithuanian, I was intrigued and excited by the rare chance to see art created by Lithuanian artists and other artists from the Baltic region.

Five museums cooperated to develop this exhibition of 150 works, many of Lithuanian origin, which ranged from paintings, drawings, prints, and sculptures, and was curated by Rodolphe Rapetti and Liis Pählapuu. Lithuanian painter and composer Mikalojus Konstantinas Čiurlionis is the best known internationally of this group of iconic Baltic artists which also include Nikolai Triik, Petras Kalpokas, Ferdinandas Ruščicas, Adomas Varnas, Antanas Žmuidzinavičius, Janis Rozentāls, Vilhelms Purvītis, Kristjan Raud, Konrad Vilhelm Mägi, and others.

“Wild Souls” showcases European Symbolism and its relationship to the independence of Baltic states after World War I with most of the art created from the 1890s to the end of the 1920s. Using the dreamlike and mythological aspects of Symbolism, the artists of the Lithuania, Latvia, and Estonia composed an original and unique blend of elements related to folklore, spirituality, landscape, and agriculture. Although many of these artists employed symbols that are deeply personal, viewers are intended to discover the meaning and emotion contained in the images for themselves.

Some visual symbols are more readily recognizable, like crosses which are a common subject of Lithuanian folk art. There were also works which included images of amber, trees, and white birds, all symbols of cultural significance in Lithuania.

As I gazed upon these works, I was struck first by their sheer beauty. The longer my gaze rested on a particular piece, the more I felt the effects of the images to evoke ephemeral emotion, feeling, and a sense of place and belonging. Linked to these artists by my Lithuanian-American heritage, the stories of my father and his family, I felt a longing to see for myself the land of my father and the people that inspired these powerful, beautiful works of art.

The exhibition galleries were full of visitors lingering within inner worlds, each searching to distill meaning, mood, and understanding in their own personal way from these works created at the beginning of the 20th century. I was surrounded by quiet reverence, a true rarity in our busy, social media-obsessed times. There were no selfie sticks, pushy tourists, or unwieldy tour group crowds here.

I wished I could have returned for another visit to experience the exhibition again but sadly it would be my last night in Paris, part of our whirlwind three week 20th wedding anniversary trip to Europe. We would be travelling to Brussels the next day.

The “Wild Souls. Symbolism in the Baltic States” exhibition at the Musée d’Orsay closed on July 15. After Paris it moves to Tallinn, where the Estonian National Museum will host the exhibition in the KUMU Art Museum from October 12 – February 3, 2019. Fortunate fans of Lithuanian and Baltic art and culture will have another chance to view this powerful and poetic display, part of the ongoing celebrations to mark the independence centennials of the three Baltic countries.