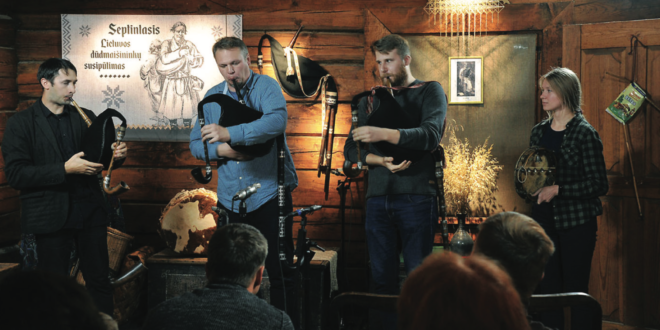 About 1968, more and more students became interested in the old heritage of our country and ethnographic expeditions were organized. Their purpose was to collect surviving traditions, examples, stories, songs and dances. People formed groups to play traditional folk music. During the period of Soviet occupation from 1945 to 1990 the communist regime supported “the art of folk” by professionally distorting reality and selecting works that were considered suitable for their ideology. Folk art and dance ensembles like “Nemunas”, “Lietuva” and “Rasa” were established and supported for this purpose. However, the movement of true folklore enthusiasts that started in 1968 was the beginning of an authentic ethnic music revival.

Some people tried to make bagpipes, but in most cases these attempts were not successful and there were no experienced makers who could make a good-sounding instrument. In 1987, a jazz musician, Skirmantas Sasnauskas, got together with a craftsman to successfully construct a bagpipe which was then used in jazz compositions. He still plays this particular instrument in concert.

I first acquired my own bagpipe in 1999. I bought it from bagpipe master Todar Kažkurevič from Belarus and started playing it in my apartment. Of course my neighbor heard the playing and came to listen… After listening to me he told a story about him visiting Labanoras, a small village in Lithuania, in 1970. This was the place where he heard a “Labanoro dūda”  (Labanoras pipe) being played by a priest. This aroused my interest and after some time I went to that village and started asking local people about that pipe and, after several years, came across the instrument at the Švenčionys museum. That was the beginning of my interest in the history of this instrument in Lithuania. My friend Todar Kažkurevič and I visited all the museums in Lithuania that had bagpipes. We took pictures of these instruments and measured them. In all we found twelve examples, not all of them well preserved.

We have had many discussions with bagpipe makers about the role of the bagpipe in life today. Our intention was to recreate this instrument, which has a place not only in our mythology but also in our rituals. Over time, people started to invite us to play bagpipe at their baptisms, weddings, and funerals, but the instrument did not find a place in popular music.

A breakthrough happened in 2004 when the CD “Silence of Labanoras” was recorded together with Lithuanian jazz star Petras Vyšniauskas. The recording was made inside a 300 year old house, which now is a museum (of Antanas and Jonas Juška). The space gave the recording a peculiar sound and special mood. The music was free improvisation based on folk melodies. After the release of this album we were asked to perform in some of Lithuania’s largest cities, including the international festival “Kaunas Jazz,” part of the Europe Jazz Network and a concert venue that features highly valued jazz stars from all around the world. This was strange music, but more and more people wanted to start playing bagpipes.

For seven years Todar Kažkurevič made bagpipes and it was his only source of income at the time. There are now some new craftsmen who are trying to make bagpipes, though as yet their results are not very promising. In Lithuania some musicians play Latvian bagpipes, but in general people who want to play pipes rely on instruments supplied by makers from Belarus such as Dzianis Sukhi and Todar Kažkurevič. Dzianis and Todar create instruments based on museum examples while adding their own improvements in construction and materials. Also, they have to consider which pitch to make the instrument in. Bagpipes in the key of either D or G, with one or three drones (bourdons), are the most popular today and play with a fully opened fingering system. However, in old recordings we often hear musicians playing pipes pitched in the key of A.

In 2008, I invited bagpipers from Lithuania to the the first gathering of pipers. It is difficult to translate the title of this event; we call it susipūtimas in Lithuanian; in English it would be something like “bagpiper blowout.” This unusual event is like a festival for bagpipers: participants listen to each other playing and share their experiences. If there is a possibility, I invite bagpipe makers from all European countries. Till now we have had participants from Latvia, Estonia, Belarus, Slovakia, Sweden, and Croatia. The makers talk about their instruments and demonstrate how they tune them and play their traditional music. We also organize two public concerts for the audience. As Lithuanian bagpiping was on the edge of extinction, these are the methods being employed to try and raise interest amongst the people, restore the traditions and develop a taste for this musical genre.Today there are more than one hundred instruments in Lithuania, though not all of them are in a proper condition to be played. Bagpipe music is now often performed on radio and can be heard during various ceremonies and festivals.

There have been seven of these susipūtimai over the past 12 years. The most recent was held in 2019. Videos of these gatherings can be enjoyed at www.dudmaisis.lt/events.php.

Previous Thirty Years Ago, Lithuania Faced Its Moment of Truth
Next Emanuelis Zingeris. An Eyewitness Recalls – 31 Years of Independence and Counting