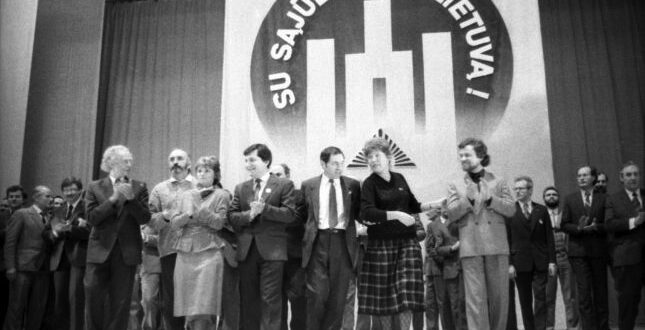 Emanuelis Zingeris (center) was a member of the pro-independence Sąjūdis movement and was elected to the Lithuanian Parliament in 1990, where he served as chair of both the foreign affairs committee and the human rights committee.

Emanuelis Zingeris. An Eyewitness Recalls – 31 Years of Independence and Counting

Statesman Emanuelis Zingeris, a signatory of the March 11, 1990 Act of the Restoration of Lithuania’s Independence, is serving his seventh term as a Member of Parliament, the Seimas. Zingeris is also vice-chairman of the Human Rights and Legal Affairs Committee in the Parliamentary Assembly of the Council of Europe.  He is currently one of Lithuania’s most vocal and recognized voices supporting the struggle for liberty and democracy in Russia and Belarus. Zingeris kindly agreed to share his views here with the readers of Draugas News.

Could you share some of your memories from that historic date of March 11, 1990?

The ambiance of imminent freedom engulfed us at the time. I hail from Kaunas – where my mother was born in 1922 – she is still alive – and my father was born there in 1918.  While growing up in Kaunas, I was surrounded by the best of the local intelligentsia and Voice of America was a daily visitor in our home and that of our friends. It was a singular source of reliable information during the Soviet era. The desire for freedom in Kaunas was long-established and grew stronger as we approached March 11, 1990.

On March 11, 1990, we achieved that which had been nurtured in most of our hearts and by then publicly voiced by a few of us as well. At that time, there was a  concern that voting for the restoration of independence will get us into serious trouble. Honestly, some believed that the KGB would kill them for having the audacity to contemplate freedom. I, too, was concerned with my family’s safety and sent my wife Virginia and our one-year-old daughter Estera and our five-year-old son Dovydas from Vilnius back to Kaunas. The Soviets were everywhere – the tanks were rumbling outside the walls of the Seimas. But the spirit of liberty had been released, and there was no going back. Sąjūdis, the national movement that led to the historic declaration, had already initiated preparations for the landmark event two years prior.

After the declaration of freedom, I, along with other March 11 signatories, set out for the Scandinavian countries, seeking international recognition and support for our decision. We did not have the slightest idea of what to expect after our historic announcement and what the reactions will be. Badly bruised and infuriated, the Soviet Union was simmering with revenge. Like many others, I did not expect it to crumble so fast, but it turned out to be grounded on feet of clay.

The achievements over the last 31 years are impressive and an inspiration to other nations seeking freedom. Were there any setbacks and disappointments in the course of your struggle?

Some of the disappointments are rooted in our attitude, our national mentality. It was our belief, perhaps naively, that with the restoration of our independence in 1990, the historic spirit of February 16, 1918, when the newly elected Council of Lithuania after World War I first proclaimed the restoration of an independent State of Lithuania, will be replicated in our time. But it just did not happen, unfortunately. I am convinced that we need to return to our roots, to the idealism of 1918. We need to foster, notwithstanding the hardships, a national sense of unity and purpose.

Admittedly, the historic reality is different – back in the 1920s, our society was one of proprietors; most of the countrymen owned a parcel of land. After the occupation, the Soviet system of collectivism deprived us of that.

Now, when I look at Vilnius from a plane window, I still see it marked with the relics of Soviet Brutalism [Brutalism is an architectural style characterized by the use of reinforced concrete and steel. It is associated with a socialist utopian ideology and was popular in the post-war Soviet Union – L.J.]. Thus it isn’t surprising that Vilnius was chosen as the location for the blockbuster miniseries “Chernobyl.” Soviet apartment blocks and rusting factories of that era are still standing, although many of the edifices have now been refurbished. Sadly, we continue to see flare-ups of hatred, intolerance and vicious attacks on anyone expressing a different opinion in the virtual realm of cyberspace. We see manifestations of that kind crop up even after 31 years as a free European nation. It still occurs even after having invested in education promoting social responsibility. The evil relics need to be rooted out – for all time.

Regrettably, the Soviet system has taken a toll on our nation. It swept away our entire intelligentsia. It will take us a long time to reach the cultural level of the Danes or the Swedes. As a Jew, let me remind you that it took Moses 40 years to bring the Jews to the Promised Land. Lithuania is just entering its fourth decade on its journey as a free state, so I hope we arrive there within 10 years. The coronavirus pandemic has been demoralizing. The fear and uncertainty caused by it remind me of the era of Stalinism and Hitlerism. We need to finally rid ourselves of the mentality of fear, which, unfortunately, is easier said than done.

I recently spoke with a fellow signatory of the March 11 Declaration of Independence, Laima Liucija Andrikienė. She commented that Lithuania’s greatest challenge is its population decline. Israel, however, has one of the world’s fastest-growing populations. Is there anything Lithuania could learn from Israel to boost its sagging birth rate?

Well, there is no single pill one can take to make babies. Despite the adverse environment that Israel finds itself in – it lost over 26,000 young men and women in seven military conflicts since its establishment in 1948 – demographically, the country is doing well.

The bottom line is to create favorable living conditions for families and, indeed, for everyone. This is key.

Our understanding of procreation is more similar to the Nordic countries than the Southern ones, where groups of children scamper thorugh the streets and where family traditions often run deep, are respected and are passed down from generation to generation.

Although we’ve increased our living standards tangibly over the years, unfortunately, many families in Lithuania still have to pinch pennies. No PR campaign or sermon will persuade Lithuanians to start families if their daily problems persist.

Although more Lithuanians disclose to pollsters that they have increased confidence and are happier now, much needs to be done to improve our index of happiness. It all boils down to the same thing at the end of the day: the happier people around, the more kids will abound. Also, do not forget that Israelis enjoy sunshine year-round, while in Lithuania, we often lack it.

You’re a staunch supporter of freedom and democracy in Russia and Belarus. Do you see Belarus President Alexander Lukashenko and Russian President Vladimir Putin still in power in, say, three years?

I believe the days of the former are numbered. Lukashenko still clings to power just because Putin supports him, but it is just a matter of time when the wrath of the Belarusian people will sweep Lukashenko away. I was a member of the Seimas commission set up to negotiate Lithuania’s extrication from the Soviet Union and the Russian Federation in the 1990s. I will say that back then, I saw more hope and optimism in Russia than I do now. Sadly, most of the Russian democrats have been sidelined – some of them by poisoning or otherwise. Anna Politkovskaya, Boris Nemtsov (who was a good friend of mine) are just a few names silenced by assassinations. As we know, Aleksei Navalny is imprisoned. They tried to get rid of him by poisoning him. Sadly, the democratic far-reaching ideas of Russia’s Europeanization and modernization by Nemtsov and, previously, Andrei Sakharov [Russian nuclear physicist, dissident and 1975 Nobel Peace Prize laureate] were mangled and cut out from the Russian narrative by the incumbent president, Vladimir Putin, who chose the Eurasian path. We see Putin undermining the Jeffersonian world order. Fortunately, U.S. President Joe Biden reversed Trump’s “America first” approach. I believe we will see democracy and solidarity promoted by Biden. Only if this course is maintained will Europe, including Lithuania, withstand encroaching China and Russia (which is losing its steam against the former).

To answer your question directly, I see Lukashenko, not Putin, falling within the next three years. Belarus’s youth does not want to live in a Lukashenko world, who is a successor of Felix Dzerzhinsky [Dzerzhinsky (1877-1926) nicknamed “Iron Felix,” was a Bolshevik revolutionary and mastermind of the secret police for the post-revolutionary Soviet regime – L. J.].

As far as Putin is concerned, I, alas, see him in the Kremlin over the stretch if he remains healthy. The pyramid he has created to keep a tight grip on power – the latest refortification of it came through July 1 amendments [Russia’s constitutional “referendum” held on July 1, 2020, delivered its expected outcome — President Putin can serve until 2036 – L.J.] – would be difficult to dismantle. Of course, one’s health is never a sure thing.

How will you be celebrating March 11th this year amid the quarantine?

As in the past, the signatories will meet face-to-face, but it will probably be somewhat limited in nature given the lockdown restrictions. I often meet Vytautas Landsbergis, Nijolė Oželytė, Saulius Šaltenis and some of the other signatories. We come together and recall those historic days.

If I may, I would like to use this opportunity to express my heartfelt gratitude to the Lithuanian community in the United States and particularly in the Chicago area for their unwavering support, inspiration and protection we’ve received from March 11, 1990, to the present day.

Previous Susipūtimai: Bagpiper Blowouts
Next Pains and Rewards along the Path to Freedom