Home - Geography-Regions - Trakėnai – A Breed of Horses Heralds its Birthplace 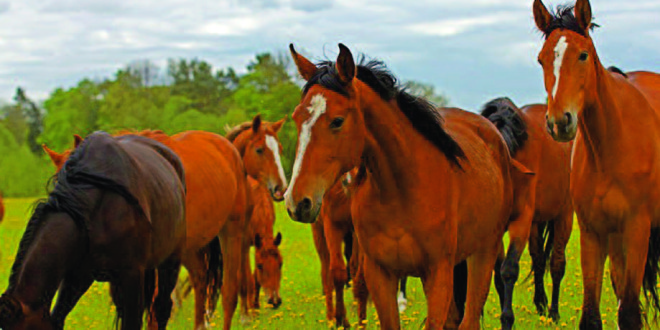 Trakėnai – A Breed of Horses Heralds its Birthplace

Greater Trakėnai (Hauptgestüt Trakehnen) is famous as a birthplace of riding horses. The origin of the Trakėnai breed and the attempts to preserve it are a part of equestrian history that involves Germany and Lithuania Minor, and recently, Russia as well. “Trakėnai” is an old Baltic word meaning a clearing in the forest, a glade if you will. In the neighboring parish of Tolminkiemis, Kristijonas Donelaitis wrote his classic poem “Metai” (The Seasons), so this region is linked to several important aspects of Lithuanian history. However, no longer can one find the location “Trakėnai” (Trakehnen) on a map of present-day Europe; it’s now part of the Kaliningrad region of the Russian Federation, and it’s new Russian name is “Yasnaya Polyana,” meaning “bright glade.”

The origin of Trakėnai is closely connected to the growth of the cultural and political power of Prussia. In 1713, Friedrich Wilhelm I, the king of Prussia, who was known as the “Soldier King” (Soldatenkönig), wanted to improve the military prowess of the army and to provide for its material well-being, and so he issued “An Edict on the Improvement of Prussian Horse Breeding,” ordering that all horse breeding farms be consolidated. In 1731, the king gathered together all of Prussia’s horses and began to organize a cavalry. In this way a national breed of horses was created.

In 1732, a horse breeding farm was created in Trakėnai, between Stalupėnai (now Nesterov) and Gumbynė (now Gusev), situated in a royal hunting forest near wetlands. It was called Königlich Preuflische Stuttamt Trakehnen. The farm covered about 4,000 hectares and held 1,100 horses, of which half were mares. Horse handlers from 15 neighboring manors helped with the breeding and care of these cavalry horses. In 1739, the King gave the farm to his son, Frederick II (Frederick the Great, also known as “Old Frederick” or “Old Fritz,” 1712–1786). After he received this gift, the Crown Prince wrote in a letter to his wife Elisabeth Christine: “The King was especially generous and gracious to me by giving me the Trakėnai horse breeding farm. This is the most beautiful gift I have received. It embodies my greatest worldly desires.”

From 1848 onwards, the state supervised activities associated with horse breeding there. In the 19th century, the Trakėnai horse breeding farm (Königlich Preuflisches Hauptgestüt Trakehnen) extended over 140 square kilometers and included neighboring forests and fields. Next to the main manor house were stables and even a hotel (named “Elk”) for guests and workers. The staff included a supervisor, two veterinarians and eight inspectors, assisted by more than 3,400 attendants and groundkeepers.

Trakėnai horses were used for riding in hunting expeditions. From 1839 there were auctions held twice a year at the racecourse of the Isrutė barracks. The “Goltz Race” (Querfeldein Grofles Trakehner Jagdrennen) typically engendered great excitement. Prussian horses were very popular in the equestrian show jumping events and endurance tests. The administrative building of the horse breeding farm housed an entire picture gallery devoted to horses with paintings by Stefek, Koch, Krauz and other artists who were specialists in the depiction of horses. The exhibition halls also displayed collections of medals and trophies.

The origins of the Trakėnai breed

The predecessor to the Trakėnai breed was a local strain of horses called “Schweiken,” which had been bred in the region from the times of the Teutonic Knights. These were descendants of wild European forest horses known as tarpans. They were 145-150 cm. in height, of stocky build, and were similar in appearance to the “žemaitukai” horses of Lithuania. The origin of the word “Schweiken” is the Lithuanian word “sveikas” which means healthy, strong, lively, or spry. These predecessors of the Trakėnai horses came to be known as tough riding horses. During the years 1764 to 1780 they broke a speed record, making the trip from Königsberg to Berlin in 24 hours!

From 1821, horses raised on the Trakėnai horse breeding farm supplied the entire Prussian army. In the middle of the 19th century, in an effort to improve the outward appearance of the breed, Trakėnai horses selected, tested and trained at the Insterburg and Gusev racecourses were interbred with English and Arabian thoroughbreds brought from Poland. The principal characteristics of the so-called East Prussian warmbloods, where “warmbloods” means horses of a calm temperament (Ostpreuflisches Warmblut), were created by selective breeding during the second half of the 19th century. By 1913, over 50% of Trakėnai horses were thoroughbreds. During the war years of 1914–1915, most of the Trakėnai horses were herded to Silesia, in this way avoiding annihilation. They were returned after the war.

The stallion Morgenstrahl was born in Trakėnai in 1896. The precursors of his ancestral line had been brought to East Prussia from England in 1874. From 1900, Morgenstrahl was the principle stallion-inseminator of the herd. The stallion Tempelhüter, the pioneer sire of the modern line of the Trakėnai breed, was born in 1904 in Braunsberg and was the son of the stallion “Perfectionist,” the winner of the Derby and St. Leger stakes in England in 1896. Tempelhüter was the main stallion in the Trakėnai horse breeding farm from 1906 to 1931. For a time, all horses fathered by him at Takėnai were given names starting with the letter “T” – for example, Teichrose, Tarsine, etc.

The dashing stallion “Dampfross” was also noteworthy. He was born in 1916 in Stoniškiai (Šilgaliai). He was raised in Sendvaris by Jansas Gubas (in the Klaipėda region). This horse had a beautiful appearance; his grey coat shone in a special way. He also evidenced an irreproachable temperament, good perceptivity and a light and graceful gait.

The descendants of the “Dampfross” – “Perfectionist” line had an especially harmonious appearance and were astute and easily trained. Equally important for the survival of the breed was the stallion “Julmond” who was born in Trakėnai in 1938. After the Second World War he was brought to Germany, and from 1956 to 1965 he was the main inseminator at the national horse breeding farm in Marbach, Germany. The post-war Trakėnai line began with him. The last stallion of the Trakėnai breed born in the Trakėnai stables was named “Keith.”

A weather vane named “Faetonas” stands atop the tower of the building which houses the main supervisor of the Trakėnas horse breeding farm. This weather vane was designed by sculptor Reinhold Kübart (1879–1937). The same sculptor also cast a realistic sculpture of “Morgenstrahl,” the precursor of the Trakėnai horse line. In 1930 a sculpture of the mare “Constanze” was erected near the Insterburg racecourse.

An elk with seven-pronged antlers

Since 1787, horses of the Trakėnai breed have been branded with a glyph depicting the seven-pronged antlers of an elk. After 1815, double antlers began to be used to mark thoroughbred Trakėnai horses and continue to mark horses of the Trakėnai breed today. There is good reason for the head of an elk to be on this marker. The elk is a noble creature found in the forests of East Prussia. Its antlers are depicted on souvenirs and on the coats of arms of many East Prussian cities.

The Second World War was fateful for the Trakėnai horses. As the front approached at the end of the war, an effort was made to save 30,000 horses by herding them to West Germany. They traveled across the ice of the Vistula Lagoon (known as “Aistmarės” in Lithuanian). In places the ice broke, and the horses waded in the water up to their stomachs until they were soaked. Many froze to death. Only 1,000 horses reached safety, of whom 800 were stallions.

After 1945, only 27 purebred mares remained in Germany. After the war, in 1947, the “Society of Breeders and Riders of Warmblood Trakėnai Horses” (Verband der Zuchter und Freunde des Warmblut Pferdes Trakehner Abstamung) was founded in Hamburg. The Rostock-Dummerstorf Livestock Institute (Institut für Tierzuchtforschung), located in the Schleswig-Holstein region of Germany, and the horse breeding farms of Graditz and Ganschow became the principal breeding grounds for Trakėnai horses.

During the havoc-ridden war years, a few echelons of railroad cars containing Trakėnai horses ended up in the heart of Russia by the Don River river the city of Kaluga. These horses represented the best part of the herd and arrived with complete records and pedigree documentation. They were kept at Russia’s Equestrian Institute and subsequently bred at the National Kirov Horse Breeding Factory, located in the Rostov region of Russia. These “Russian Trakėnai” horses differ somewhat from their predecessors in Western Europe. Since World War II, Trakėnai horses also have been bred in Scandinavia, the Benelux countries and Canada.

In 1945, the “Nemunas Horse Breeding Farm” (Nemuno žirgynas) was founded in the village of Trepiai, in the Šilutė region. Thoroughbred Trakėnai horses were returned to this region of Lithuania in 1961; and raising and breeding resumed in the 1960s and 70s. In 1993, the Society of Supporters of Lithuania’s Trakėnai Horses (Lietuvos trakėnų žirgų mėgėjų draugija) was founded, and in 2000, the Association of Breeders of Lithuania’s Trakėnai Horses (Lietuvos trakėnų veislės žirgų augintojų asociacija) was formed.

The headquarters of the association is in the village of Šilgaliai, in a manor house built in 1669 (Stoniškiai parish). At present there are about 877 horses of the Trakėnai breed being raised in Lithuania (by comparison, from 1934 to 1939 there were between 700 and 800). Lithuanian Trakėnai horses are marked with a brand that depicts the usual seven-pronged antlers but also with the Lithuanian symbol of the Towers of Gediminas underneath.

In Germany, the Schleswig-Holstein region has become the second home of the Trakėnai breed and the guardian of Prussia’s equestrian legacy. Registries of breeding horses dating back to the 17th century are preserved there. Genealogical charts of horse lines are being constructed. The biographies of the main custodians of horse breeding farms as well as their memoirs, photographs and other records of the past left behind are being catalogued. The ethnological museum in the city of Lüneburg has a permanent exhibit in its East Prussian section devoted to Trakėnai horses, focusing on the origin of this legendary breed and on the efforts taken to save it.

In Russia in the Kaliningrad region, there is a growing interest in preserving the legacy of the Trakėnai horses. Sites associated with the original horse breeding operation are being restored. Documentary books are being published and documentary films are being produced. Much is being done with the help of German foundations. In 2001, the main gate to the historic Trakėnai horse breeding farm at Yasnaya Polyana was saved from destruction and renovated. An image of the main building now can be found on tourist postcards and books. Since 2006, dressage competitions for Russian Trakėnai horses have been held in the nearby village of Majovka (formerly Georgenburg).

A new history of Trakėnai horses is being written, and the fond memory of their predecessors is being preserved.