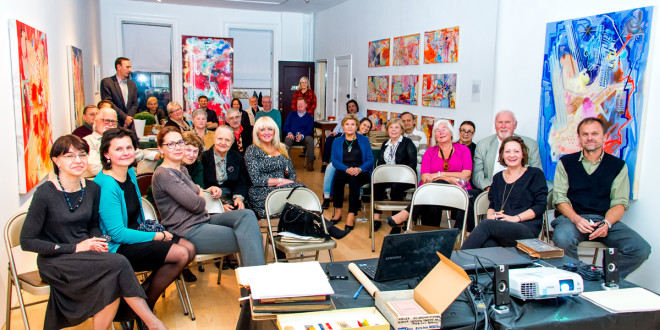 Alliance members gathered at the home office to discuss the state of the Lithuanian Alliance of America archives. (Photo Sandra Scedrina)

A cultural oasis in Manhattan

Founded in 1886, the Lithuanian Alliance of America, (LAA) the oldest continuously operating Lithuanian organization in the world, has a new lease on life as it expands its multifaceted activities promoting Lithuanian educational and heritage programs.

Organized as a fraternal insurance organization, it had over 20,000 members and 300 lodges in its heyday. Today the Alliance continues to be an active member of the Lithuanian American Council promoting educational and charitable programs. In its day it helped finance the historic 1933 flight of Darius and Girenas. Its name was prominently displayed on the fuselage of the Lituanica as a testimonial to its largess. The Alliance underwrote extensive publishing and cultural programs and maintained a fully functioning printing press which printed its weekly newspaper Tėvyne/The Homeland and numerous books and other publications.

The Alliance through great dint of effort successfully “unloaded” the major drag on its operations: the draining insurance service. Freed from the burdens of insurance bureaucracy, the Alliance was able to focus on its mission and apply its resources fostering its historic mandate to serve the needs of all Lithuanian-Americans and its affiliated Lithuanian-American organizations. As part of its reorgnization the Internal Revenue Service has confirmed the Alliance’s exempt status as a public charity under the vaunted 501(c)(3) Code section. Its standing as a central national orgnization was likewise confirmed through its group ruling determination.

OUR HOME IN MANHATTAN

The principal asset of the organization is the building in Manhattan, New York. Its location alone bespeaks its importance, which is reflected in its 10001 zip code. The building is located one half block from Madison Square Garden and New York’s historic Penn Station, as well as the Central Post Office.

The building is a four-storied strcture with a basement and patio garden. It is currently being used for various Lithuanian New York-centered activities. It is also home to the Lithuanian National Foundation. The first floor has been converted into a gallery. In addition to the art exhibits it is used for concerts, commemorations, and community meetings.

The Lithuanian Alliance of America has become the primary Lithuanian American cultural facility in New York City. It has developed into a multifaceted community organization bringing together a broad spectrum of artists and culture activits in the promotion and development of our unique culture and linguistic patrimony.

The Alliance houses an extensive and unique collection that dates back to the 1890’s. This archive encompasses a library of rare books, a periodicals collection, irreplaceable historic photographs documenting the community’s immigration history, and the organization’s data bank. Some of the periodicals have already been microfilmed but a significant number still need to be processed. The organization is seeking funding to enable the preservation of its collection of unique historic publications. Grants have been received from the Lithuanian Foundation in Lemont, Ill. and the New York-based Lithuanian National Foundation. A number of scholars have visited the facility and are lending their expertise in accomplishing this. Among them are Prof. Ramūnas Kondratas, long time curator at the Smithsonian Institute; Dr. Joseph Skirius, Pedagogical University in Vilnius, an authority on immigration history; Prof. Giedrius Subačius Endowed Chair at the University of Illinois; Dr. Robertas Vitas, Director of the Lithuanian Research and Study Center in Chicago. Most recently three scholars from Lithuania worked on the archives to organize, catalog and preserve this unique collection.

The Alliance Building has been the venue for academic lectures and readings, documentary and art film presentations, and as well as classical, folk and contemporary music performances.

Lithuanian folk music was presented by Gintaras Vilčiauskas on the folk recorder and Vilius Marma, a specialist on ethnic folk instruments.

SLA307 is an artist run artspace established in 2014, located on the first floor of the Alliance  building. It provides local and international contemporary artists a forum to exhibit and discuss their work. Most recently SLA307 organized solo shows of artists Ieva Mediodia and Daina Mattis. Previous exhibits included Lithuanian art and sculpture from the collection of Virginia and Peter Sirusas, an exhibition of American Folk Art from the collection of Laima and John Hood, as well as and exhibition of contemporary Lithuanian and Latin American art presented by Paul Debesys.

Folk traditions and crafts are among the other activities which the Alliance promotes. Among these are classes in traditional egg decorating during the Easter season and the making of traditional Lithuanian Christmas tree ornaments at Christmastime.

In April of this year Lithuanian Language Proficiency Level Test for Juniors was held at the Alliance offices. The test, prepared by the University of Vilnius, was initiated by the Kazickas Family Foundation and a group of Lithuanian Heritage Schools in the US, with support from the Ministry of Education and Science of Lithuania. The Alliance is especially proud of its participation in enabling this unique program.