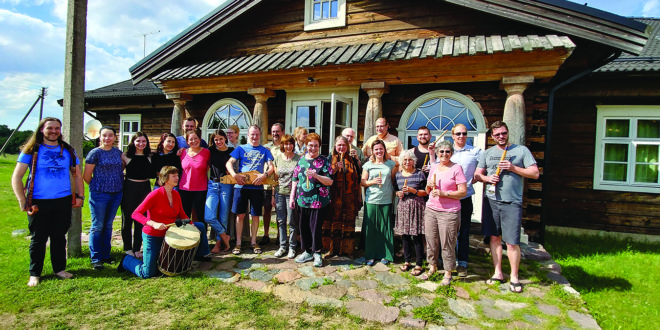 Village Harmony was founded by Larry Gordon in 1988. It began as a small ensemble of high school singers drawn from several central Vermont schools, rehearsing after school hours and touring the East Coast. In 1990 the first Village Harmony summer camp was held, establishing a model which has been maintained to this day — a residential rehearsal week followed by a performing tour with homestays hosted by community sponsors.

For over 27 years Village Harmony has been a place where teenagers who don’t follow the beaten path have been able to come together and experience the sheer power of making music as a community with like-minded peers. Recently they have included Lithuanian “Sutartinės” in their repertoire, and in June 2017  eighteen members traveled to Lithuania to glean knowledge and inspiration from masters of the ancient Lithuanian singing tradition. After a week-long training session, they gave concerts in the cities and villages of Valakėliai, Nida, Klaipėda, Molėtai, Žiūrai, Plateliai, Kernavė, Vilkija, and Stelmužė, showcasing their newly acquired repertoire.

You are welcome to join!

Village Harmony teen camps are open to ages 12-18. Alumni camps are primarily for college students and young adults between the ages of 19-26. All of the non-US camps are mixed age, open to both teen and adult singers. They have been organized in Italy, Germany, Sweden, Corsica, Bulgaria, Bosnia, Macedonia, Ukraine, Ghana and South Africa.

Unlike choirs where the aim is for voices to blend seamlessly, Village Harmony is an ad-hoc, non-auditioned group of enthusiasts whose only obligation is to be committed to making good music and not holding back.

Will Rowan: “I love sutartinės”

Village Harmony spent the summer of 2017 in Lithuania to learn and practice Lithuanian folk songs and Baltic traditions. The group was led by an award-winning composer Will Thomas Rowan, who writes everything from ballads to symphonies.

Draugas News correspondent Simona Minns spoke with Will Thomas Rowan about the experience of singing in Lithuania and Village Harmony’s plans for the future.

Simona Minns: Will, you spent last summer in small Lithuanian towns learning Baltic folk songs and ancient traditions. What was the most memorable moment for you personally and for your ensemble?

Will Thomas Rowan: The entire trip was incredible from start to finish. I think the highlight of the of the trip for me was the evening we spent in the tiny village of Žiūrai in Dzūkija. We drove along a muddy track through a field followed people walking with umbrellas and found ourselves confronted with this crowd of about fifty people who started singing at the top of their lungs the moment we stepped out of the van. We traded songs for a while until it began to rain in earnest and then we fled under a roof with a table covered in cured meats, vegetables, bread, and cakes, and homemade moonshine. When we announced we needed to leave, they scolded us for not eating enough, and when we started to drive away, the muddy earth almost didn’t let us go!

Is Village Harmony applying the songs and knowledge in ensemble’s practice today?

I have been continuing to teach Lithuanian songs and Sutartinės in Village Harmony and related workshops. The experience of having sung this music on the ground it springs from has been incredibly valuable, both regarding nuance of style and also in gaining a better understanding of the spirit and history of the culture from which the music springs. Songs about riding off to war achieve a new poignancy having talked about long military service during the Russian Empire; sutartinės about flowing rivers gain a depth of meaning after singing them back and forth across a rushing stream near Molėtai.

What do you find most interesting about Lithuanian folk music? Could you differentiate it from other traditional music in any way?

I think the most exciting and distinctive part of Lithuanian traditional music is the sutartinės tradition. It is like very little else in Europe and reminds me most in style of Baka Pygmy music from Africa. If you allow it to, it has a profoundly entrancing effect upon the mind, but without pretense or artifice. If I had to describe sutartinės in three words, they would be “complexity through simplicity.”

Mary Cay Brass was leading Village Harmony ensemble before you, Will. Tell us a little bit more about the challenges of taking on this type of job. What inspired you personally? What is the most rewarding?

When I was a teenager, I attended Village Harmony’s camp programs as a participant. These experiences were formative for me both as a musician and also as a growing person. I feel fortunate to have been invited to lead these camps and to facilitate these experiences for camp participants. The challenges are as with any other facilitation: keeping up energy while remaining calm and remembering all the logistical details.

Could you share some of your plans connected with the repertoire your ensemble learned last summer?

Village Harmony has now invited Lithuanian Artūras Sinkevičius to lead a camp for teenagers this July in the US. Artūras is a knowledgeable, personable, and enthusiastic leader, one of my favorite collaborators yet. We are also bringing some young people from Lithuania to participate in the camp with us. There is more information about that program at http://villageharmony.org/camps/teen-camp-2-2018/ The camp will tour around the Northeastern USA, mostly New England.

Tell us a little more about the themes, which are being reflected in Lithuanian folk songs. Do Village Harmony members analyze the lyrics, learn the symbolic language? Do those symbols connect with other cultures and tribal traditions?

One of the themes I see most often in Lithuanian folk songs is parallel and connection between nature and humans. In every song as soon as I hear of what happens to a linden tree, I know the same will happen with a woman. The falcon and the cuckoo fly by, and I know there will be a young couple. It reminds us that people are not separate from nature, but rather a part of it. That is an important message to remember in our times.

Do you have your favorite Lithuanian folk song?

There are so many good ones! For a solo song, “Tėvulio Dvarely Jieva­rėlis.” For a sutartinė “Turėja liepa.” That will change in a month when I fall in love with something new.

I’ve read, that you are learning to play theLithuanian bagpipe. Is there a story about that? What other instruments do you play?

Something about the sound of the Lithuanian bagpipe captured my attention the first time I heard a Kulgrinda concert. I’ve been practicing since the first time I visited Lithuania in 2015. I play a lot of folk instruments including the banjo, pennywhistle, Georgian chonguri and panduri, accordion, and piano. I can’t play a concerto on any of them, though.

Do you have a chance to incorporate your music composition background to the vocal ensemble practice?

I conduct my compositions often in Village Harmony camps. I also have been making arrangements of sutartinės for choirs to sing.

Is there a particular practice routine Village Harmony applies to each rehearsal?

The rehearsal process for Village Harmony camps is very intensive: eight hours of rehearsal a day! This happens for a week, and then the ensemble goes on tour for two weeks.