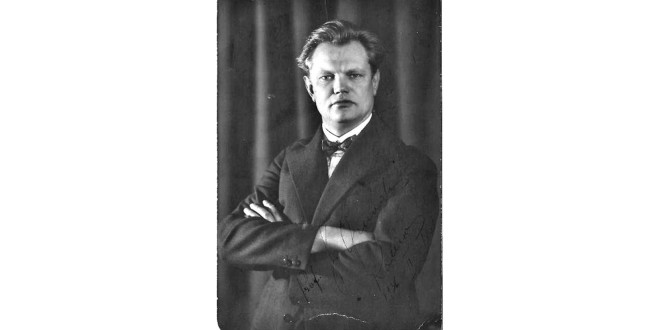 I strive to be a Lithuanian national composer.

This is a third in a series of articles that explore the works and lives of Lithuanian artistic luminaries who are unduly neglected. Seldom mentioned outside of Lithuania, these artists and their work represent the social and artistic trends of great importance inside and outside of Lithuania. It is the author’s hope that we can rediscover the many forgotten treasures and fascinating lives lost in the pages of time.

“By using modern means, I strive to be a Lithuanian national composer.” These were the words of Juozas Gruodis, a composer and pedagogue of humble beginnings. Some composers are credited for sweeping innovation, while others continue on a progression laid by their forebears. Gruodis is a rare example of both. Like many other artists of his time, he received his formal training in Russia and Germany, as there were no formal institutions in Lithuania to study composition. Upon his return, he integrated his understanding of Lithuanian music with the modern trends of Europe at the time. This important synergy is what allowed Lithuania to develop its own distinctive voice. Not only that, but he was vital to establishing a pedagogical tradition that would train generations of composers following him. Gruodis was deeply rooted in Lithuanian folk and dance music traditions, having grown up in a small rural village playing organ, violin and singing. There is no question that the energy and rhythm, as well as the tunefulness in his music are a direct result of his early life. He didn’t begin his formal studies until the age of 30, so much of what shaped his musical sound was a result of his early experiences.

Gruodis was born in the small village of Rokėnai to a poor family of artisans and musicians. He was primarily self-taught and began his career by playing the organ in various local churches. He also served as choir director and vocal soloist. He occasionally took lessons at the Rokiškis Music School, but was self-disciplined and learned most from self directed study. Gruodis’ formal musical studies were spread out over a long period of time and interrupted by World War I. His formal studies began at the age of 30, first taking private lessons in Moscow in 1914, and then entering to the Moscow Conservatory in 1915. His degree was interrupted in 1917, when he was conscripted into the Russian army, where he served as a bandmaster. Following the war, he completed his studies in Moscow and went on to study at the prestigious Leipzig Conservatory with a scholarship from the Lithuanian government. He lived in Leipzig from 1920 until 1924 where he studied with a number of distinguished professors and developed a broad understanding of many modern musical innovations. Much like Vladas Jakubėnas’ time in Berlin, Leipzig afforded Gruodis the chance to synthesize his mature musical style. Gruodis conceived some of his best works there, such as the String Quartet, and a number of his most popular vocal works. These were the first pieces to have prominent Lithuanian folk elements in both harmony and rhythm. Most notably, Gruodis makes use of the sutartinės, a folk song form native to northwest Lithuania. Simply meaning: to be in agreement, this song form uses two or three voices in various forms of imitation and counterpoint.

forms of imitation and counterpoint. Upon returning to Lithuania in 1924, Gruodis settled in Kaunas where he took up a post as Assistant Conductor of the State Opera Theater in Kaunas. It is interesting to note he conducted the Lithuanian premieres of operas such as Pucini’s Tosca, Tchaikovsky’s Queen of Spades, and Wagner’s Lohengrin. After three years at this post, he was offered directorship of the Kaunas Music School in 1927. He succeeded Juozas Naujalis, who had been the patriarch of Lithuanian music up until that point. Gruodis established the first theory and composition classes and would continue to teach as Head of the Composition Department until his death. The Music School was restructured in 1933 and became Lithuania’s first national conservatory: The Kaunas Conservatory. This was no small achievement, since up to this point almost no prominent Lithuanian artist received formal training in their homeland. Due to ailing health, Gruodis decided to resign as director and relinquish the demanding responsibilities of that office. He continued his duties as professor at the Conservatory and worked as director of the song and dance festivals, including being the chairman of the Lithuanian Composer’s Union

When Lithuania was occupied by the Soviet Union during World War II, Gruodis’ influence and work were not significantly affected. He continued to be an influential figure in post-war musical circles, receiving recognition from the new Soviet state as an artist of merit. In February of 1948, the Communist Party issued a statement condemning all works considered “formalist.” This condemnation is best known for its effects on Dimitri Shostakovich and Sergei Prokofiev, the two most notable Soviet composers. Formalism was a description of music that was too modern, which lacked a definitive understanding by the masses. This was, of course, a highly subjective means by which to judge art, and one that was often more whimsical than accurate. Arts criticism under a political banner often trumped real musical meaning and creativity. Socialist Realism was the prescribed artistic form of the Soviet Union at this time, requiring composers to write works that glorified communist values. The concepts indicative of this form included party-mindedness, elevation of the common man, relentless optimism, and a revolutionary spirit. There was no place for negativity or pessimism, unless it was used to describe pre-Soviet conditions. In a musical sense, these were very limiting ideas that hampered creativity, due to the subjective nature of musical criticism. Any works that exhibited modern tendencies such as complex rhythm and harmony were immediately dismissed as formalistic and banned from performance. An overwhelming amount of ‘throw away’ music was written. From film scores glorifying the Soviet War effort, the expansion of industry and reinforcing the cult of Stalinism, to cantatas commemorating The Great Patriotic War and the October Revolution. Soviet composers had to make a great deal of artistic compromises. This was not only to continue writing, but to continue living normally without the threat of imprisonment and complete repression of their work. That said, many composers worked within the confines of this ideology to great effect, creating some of their finest works. Two of the most prominent examples of this are both Prokofiev and Shostakovich’s Fifth Symphonies. Both works re present an ingenious adaptation of socialist realism into a cohesive musical argument, without compromising artistic merit. That said, both Prokofiev and Shostakovich had to dismiss many for mer works as formalistic and see them banned and suppressed by the Soviet government.

Gruodis was unfortunately not immune to these same attacks and criticisms. Even though his works were much less modern than those of his contemporaries, he was still criticized for digressions from the Party line. He, like Shostakovich and Prokofiev, had to issue a public condemnation of his work as a form of reparation to the State. On April 16, 1948 such a statement was issued in the paper Tiesa. In addition to being forced to condemn his music, he had to issue an apology to the people and affirm his desire to conform to Party rules, since “Music should come from the people and for the people.” The very same day that the article was published, Juozas Gruodis died of a heart attack. Posthumously, his works have remained in the repertoire and his name is one of great admiration. There are numerous monuments honoring his work, including a museum in his home town of Rokenai, a memorial museum in Kaunas, numerous statues. Most importantly, the conservatory he helped create was renamed the Kaunas Juozas Gruodis Conservatory, shortly after his death.

Probably the most important work composed by Gruodis was the ballet Jūratė and Kastytis,  based on the great folk ballad. This was the first ballet to be composed by a Lithuanian composer, and it has subsequently remained a staple of the Lithuanian repertoire.

It was completed in 1933 and premiered in Kaunas. He also wrote a significant number of smaller works, including songs for voice and piano, two sonatas for piano, a violin sonata and other violin miniatures.

Many of the songs he wrote in Germany have strong expressionistic trends, being very chromatic and pessimistic. Alternatively, many of his songs based on Lithuanian subjects are vibrant, celebrating nature and centering on themes about animals or plants. Gruodis also composed a string quartet in 1924 which is among the most frequently performed of his works. When it came to orchestral pieces, Gruodis was known to work very slowly and meticulously, revising and painstakingly crafting his pieces. In addition to a symphonic prelude (1930) and a theme and variations on folk themes (1945), his three large-scale symphonic poems are Gyvenimo šokis (Dance of Life – 1928), Iš Lietuvos praeities (From Lithuania’s Past – 1939), and Rudenėlis (Autumn). All of these works are based on Lithuanian subjects and have closely integrated folk song styles with a late-romantic orchestral style. There is also a prominent influence from the Impressionist composers such as Debussy and Ravel. Though his works can contain a typically Lithuanian melancholy, the vibrancy and energy in most of his music expresses pure joy and admiration of his homeland. His name is also a prominent one for all those who have sung his choral arrangements of folk songs. There are more than 40 that he arranged and they continue to be used to this day.

Previous Lithuanians and the Vikings
Next A conversation with Dr. Indrė Viskontas