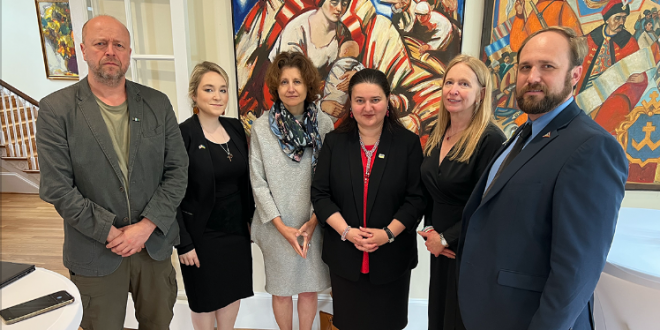 There is no alternative: We must win A conversation with Jonas Ohman

July 2, 2022 Charity, Interview, Politics, War Comments Off on There is no alternative: We must win A conversation with Jonas Ohman 213 Views

Jonas Ohman is a legendary figure in Lithuania. Born and raised a Swede, he first arrived in Lithuania in the early 1990s as a student. Then he knew nothing about the country except that it was occupied by the Soviet Union. He was impressed with how ordinary Lithuanians faced down Soviet tanks and stood their ground while creating a human shield around the Lithuanian Parliament. Since then, he has taken up residence in Lithuania, learned the language, worked as a journalist and produced and directed several well-received television films on the Lithuanian resistance.

After Ukrainian citizens rose against Soviet-style corruption during the Maidan Revolution, which culminated in President Viktor Yanukovych’s ouster in 2013 and after Russia’s occupation of Crimea in 2014, Ohman felt a calling to aid Ukraine’s pro-democracy movement. He founded Blue/Yellow for Ukraine, a Lithuania-based non-government aid organization that provides Ukrainian soldiers and volunteers with non-lethal supplies to battle Russian aggression. Draugas News wrote about its nascent steps in 2014. In February of this year, when Russia invaded Ukraine, Blue/Yellow was ready to provide aid where it was needed most – at the front lines.

The Blue/Yellow organization is respected and trusted in Lithuania. With only four full-time workers but scores of volunteers, it has organized some 30 million dollars of aid for Ukraine. The outbreak of the current invasion prompted the Lithuanian public to be exceptionally generous. A substantial amount has also been collected in the U.S. by the organization’s affiliate, Blue/Yellow for Ukraine USA, headed by Aušra Tallat-Kelpša and Rima Žiūraitis. According to Forbes, Blue/Yellow is the second-largest foundation supporting the Armed Forces of Ukraine.

In May, Jonas Ohman came to the U.S. to garner support in Washington D.C. and seek out military surplus sources for gear and drones. He stopped by the Draugas editorial offices, where editor Virginija Petrauskienė engaged him in a frank discussion about his motives, successes and concerns. The conversation was translated and edited for publication.

Your organization Blue/Yellow is well known in Lithuania and Ukraine. Is it known in America? What do you hope to achieve during your trip to the U.S.?

Blue/Yellow was founded in 2014 after the Russian occupation of Crimea. Since its inception, Blue/Yellow has provided some $30 million worth of non-lethal equipment for Ukrainian troops, donated by the people. Sometime after the founding of our organization, Rima Žiūraitis and Aušra Tallat Kelpša created a subsidiary organization called Blue/Yellow for Ukraine USA. They set up a PayPal account to collect donations. There was not much activity in the early years, but we prepared for the Russian offensive in Ukraine. Americans learned about Blue/Yellow from the press – it was recently featured in an article in the Washington Post – ­and donated money to support the Ukrainian troops. Since February, about 800,000 dollars have been raised in the U.S., and remarkably many donations have come from people having no direct Ukrainian nor Lithuanian connections.

With the Americans’ help, we bought several drones and protective equipment for the troops. Everything is more plentiful and cheaper here, but there are other problems: licenses, transport, customs, etc. Still, on balance, there are more advantages than disadvantages. Rima has found contacts with the Ukrainian diaspora. We are cooperating with them. In Chicago, we met with Ukrainian Americans together with Lithuanians, including representatives of the Consulate General and the Lithuanian American Council, who informed us about their activities for Ukraine. In addition, we met with elected officials in Washington.

Do you think that America is sufficiently aiding Ukraine at this time?

In Washington, we met congressional staff members and conveyed our expectations and needs. We met with Congressman Joe Wilson (R-SC), a senior member of the House Armed Services Committee who understands our situation well. We discussed problems relating to obtaining export licenses for items purchased in the U.S.

We at Blue/Yellow have been involved with Ukraine’s struggle since 2014 and have noted changes in American and international attitudes towards the situation. Yes, arms are being sent, and America and Britain are leading the way in aid to Ukraine. But actually, even more help and support are needed.

And now, whenever I return to Lithuania from Ukraine, I am impressed at how much Lithuania has progressed in those years of independence. Why do Lithuanians support Ukraine so strongly? There are two reasons: we were in the same situation at one time, so we know what we are talking about. And we have a lot to lose in Lithuania now: people are living quite well, in some sectors, we are approaching the level of Scandinavian countries. The government is stable; people have the freedom to express themselves.

Lithuania has developed a civil society over the last three decades, which can donate millions in a few days if it so chooses. The ‘Bayraktar’ purchase campaign demonstrated this. Any observations?

I was in Ukraine at the time the war broke out in February. I left the front line a few hours before the Russian attack. I have a receipt from a petrol station in Mariupol, dated  February 23. I keep it as a souvenir because neither the station nor Mariupol are there anymore. They are in ruins.

Since 2014, it was clear that the war was only a matter of time. I saw how things were going in the Donbas eight years ago. And I realized that Russia would not stop there. So, when I heard about the Russian offensive in February this year, when I was near the front line, we found a taxi driver, paid him 500 euros in cash and asked him to take us to Poland. We are driving through Ukraine, and suddenly I get a call from a Blue/Yellow financier in Lithuania, who tells me that when people heard that the war had started, they immediately began donating. An unbelievable amount of money came in. Around 5 million euros poured into the organization’s account within a few days. We have been working for many years to help Ukraine. Many civic-minded people have donated generously to the cause. We have thus provided the Ukrainian forces with 350 vehicles and massive amounts of protective equipment – helmets, vests, drones, night vision equipment, and medical equipment. If it were up to the public, all the necessary weapons would have been in the hands of Ukrainian troops long ago. But the heads of state are always thinking differently, taking a broader view, and weighing many circumstances in the light of their interests.

So is it fair to say that the public is at times ahead of the state?

This is not the first time the Lithuanian public has been ahead of the state — for example, the resistance movement after World War II. The state was gone, so people decided to resist the invaders. And what about the uprisings in Hungary, the Czech Republic, and Solidarity in Poland, where society rose up when the government was either absent or thought differently from the people. Why do I like Lithuania? The events of 1991 are a unique case. When people encircled their parliament to protect it, it was a miracle. In any case, the active position of civil society is a very positive thing. However, in Eastern European countries, as a rule, the authorities have been rather sluggish. It is now vital for Ukraine to win the war, create a normal democratic state, to be accepted into the E.U. and NATO.

As someone who has been to Ukraine many times and knows the country and its people, what do you think will be the war’s outcome? Will Ukraine prevail?

It is dangerous to live next to Russia now. If it wins now, where will it go next time? If it is terrible now, it will only worsen next time. Thus we must win. It cannot be otherwise. For the sake of Lithuania and the sake of Europe, we must win this time. By “we,” I mean Ukraine, Lithuania and Europe.

Why did you personally become so actively involved in helping Ukraine’s fight for freedom and independence? Do you have any Lithuanian roots? How did you learn the Lithuanian language, which is usually a “tough nut to crack” for foreigners?

I live in Lithuania. That says it all. I am not Lithuanian; I have no Lithuanian roots. I came to Lithuania as a student in 1990-1991, illegally, by the way. I was some 20 years old then. It was a country that was utterly unknown to me. I thought it would be interesting to live here. Lithuania at that time was engaged in a heroic battle – the fight for freedom and independence. I was given a book by the legendary freedom fighter Juozas Lukša-Daumantas. Having read it, I was “overwhelmed”; it was a revelation to me. What attracted me most to Lithuania was its ongoing quest for freedom. Then I started learning Lithuanian. I studied the history of Lithuania; I have read extensively about the occupation and the resistance. Over the years, I have made several films about Lithuania’s heroic struggle against tyranny.

I sat in the reading room of the university, and I studied on my own. There were no courses at that time. I had a system of learning the language – I wrote Lithuanian words on cards and looked at them whenever I had a minute of free time. Now I am learning Ukrainian this way and am already quite advanced. (Mr. Ohman speaks eight languages – ed.)

So when I went to Ukraine in 2014, I saw many familiar sights. It reminded me of Lithuania as it struggled in 1990. And then, I decided that I had to do everything I could to help this country attain freedom. I have recorded my story and experience in my book Donbas Jazz.

What do you specifically recall from those early trips to Ukraine?

There are many stories to relate, both good and bad. War is a terrible thing – it destroys cities, people, and nature. I have been to places where I would never willingly return. I call on everyone to join this cause because this is a fight for all of us. If Ukraine wins, there will be peace for 100 years. You can join us in Blue/Yellow – we are experienced; we know what we are doing and what the fighters need. We have received 17 awards and various medals from the government of Ukraine.

Do you still have time for creative endeavors while doing this difficult job?

I am working on my second book now, with the working title Ukrainian Blues. I am also considering making another film. I create every day. Because what I am doing now is supporting freedom, which is a daily occupation for me. We have a chain of supporters from Los Angeles to Severodonetsk, and with such support, we shall prevail.

Thanks for sharing your thoughts and observations; we wish you and your comrades success in this vital struggle for freedom and human rights.

The article was published in “Draugas NEWS”, May 2022 edition.

Previous An Immigrants’ Grandson Remembers: Life and Death in a Pennsylvania Coal ‘Patch
Next The Case for Unconventional Thinking