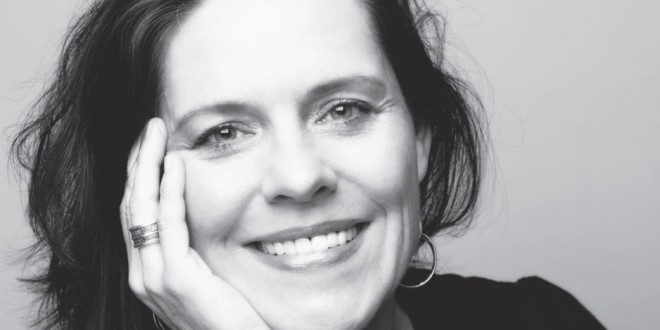 Lithuanian-Canadian composer Veronika Krausas is driven to create music that coalesces with other art forms. Be it film, dance, poetry and other mediums, it has been Krausas’ vision to link her music with the arts as a whole. Her relationships with leading figures in the realms of theater, production, opera, orchestral music, poetry and dance have lead to numerous creative collaborations that have yielded remarkable works of great variety.

Born to a Lithuanian family in Australia that moved to Canada, Krausas currently lives in Los Angeles. She made L.A. her home after completing her doctorate in composition at the prestigious University of Southern California Thornton School of Music, where she is now also a professor in the Composition Department. Previously, she had studied at the University of Toronto and McGill University in Montreal. She is a lecturer and interviewer at the Los Angeles Philharmonic, serves on the advisory council of Jacaranda and People Inside Electronics, and is an associate artist with LA’s acclaimed new opera company The Industry. 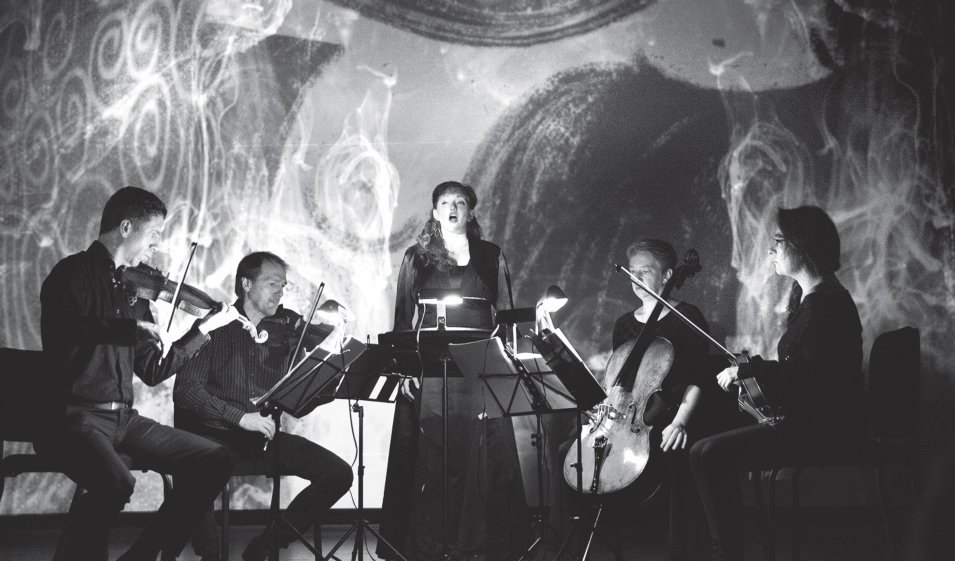 The Penderecki String Quartet gave the U.S. premiere of Midaregami, at Disney Hall in Los Angeles in February, 2009. Scored for mezzo soprano and string quartet, the work is based on the works of Japanese poet Akiko Yosano (1878-1942). The work has seen subsequent performances at University of Southern California and in Canada at the Perimeter Institute. Sillages, her quartet for four double basses premiered on the Los Angeles Philharmonic’s Chamber Series in 2014 and on the Jacaranda concert series in March 2015, performed by members of the Los Angeles Philharmonic bass section.

Krausas, a trained pianist, has composed a significant output for the piano. A set of piano études was premiered by Stephen Vanhauwaert at RedCat (Walt Disney Hall) as part of the Piano Spheres concert . The first movement is titled Precipitevolissimevolmente, the longest word in the Italian language, meaning “as fast as possible”. The second etude is the opposite, titled Freddo, meaning “cold”. A work for solo harpsichord titled L’ombre du luth, was commissioned by pianist Gloria Cheng on the occasion of presenting a new, blue harpsichord, built to the specifications of an 18th Century French master maker. The style references the music of Louis Couperin, who in the 1650’s wrote ‘unmeasured preludes’ for his primary instrument, the harpsichord. These works have an improvisatory quality as the duration of the notes, their dynamics and articulation are at the discretion of the performer. This work was performed at another Piano Spheres concert in 2013.

Krausas’ solo piano pieces UN-intermezzi, based on the novel Un-Lun Dun by China Mieville, have been released by Grammy-nominated pianist Aron Kallay. The works have links to the B minor Intermezzo (Op.119 no. 1) of Brahms, J.S. Bach’s B-flat Partita, the Gnossienne of Erik Satie and Ligeti’s L’escalier du diable, among others. This work will be performed in Paris by Suzana Bartal and at the Palaces of the President of Malta by Tricia Dawn Williams. In 2008 Krausas organized a concert for The Player Piano Project, a collection of works for player piano by 22 composers from six countries.

Her chamber opera The Mortal Thoughts of Lady Macbeth, is based on Shakespeare’s Macbeth, but from a different perspective. The action takes place with Lady Macbeth, who through her eventual desire for greed and power drives her to madness. The scenes include the three witches, who through their incantations and commentary expand on the depth and tragedy of the story. The opera was premiered at the New York City Opera’s VOX 2008 festival and subsequently won both the Best Opera and Best Performance with soprano Michelle Jasso at Goat Hall Productions Works for Opera in San Francisco (2009). A full production was made in Los Angeles in August 2010 to sold-out audiences.

Her work Analemma for 11 musicians is based on aspects of astronomy, superficially on the figure created by the position of the sun at the same time every day. The work approaches the same musical ideas from different angles. Originally commissioned by the ERGO ensemble for a joint Canadian-Lithuanian performance, a small musical motive on the piano became the kernel for the work. The work has several direct Lithuanian folk music influences, including a lullaby (Čiūčia liūlia) played on solo viola and an episode the the bi-tonal sutartine created by Krausas. The work was dedicated to Harry Friedman, one of Krausas’ Canadian professors at the University of Toronto who had then recently passed away. Analemma was an official selection for the 2012 World Music Days in Belgium. A Lithuanian premiere in Vilnius will take place this year Vykintas Baltakis conducting.

I have the good fortune of having known Veronica since I was very young, thanks to her and my mother being close friends. So far, we have explored the works of Lithuanian composers from past decades and it’s very exciting to discuss the works of a very active, living composer! Having gotten a general background on Veronika’s work, the following is from my interview with her just last week:

What fuels your drive to compose music?

I feel that I strive to create music that combines with other art forms. This goes from including texts being read in performances to the use of film footage, electronics, acrobats, dance, recitations by the performers, and other dramatic elements. I feel this has been a central part of my creative process, even before it became the norm in contemporary music.

How does your Canadian and Lithuanian heritage influence your music?

Canada is such a great country that is supportive of the arts and music. Being raised there instilled a within me a fearlessness that made me comfortable to try anything. In Canada, I’ve been able to work with some of the most artistically inspired and inspiring people for over 20 years.

When it comes to my Lithuanian heritage, it is a love of nature and song that influences me most. A lot of my music is written including voice, which is certainly linked to Lithuanian traditions. It’s the fact that in Lithuanian culture, all people are involved in making music some way or another, and it usually includes dance, allowing everyone to participate and be a part of creating something. The combination of art, music, dance have influenced me to combine all these elements in my own works.

When creating a new work, where does your inspiration come from?

When creating a work, I usually start with some sort of structural idea; a musical idea that gets larger. Sometimes, the title I choose or have come into my thoughts prompts the musical work. It has a lot to do with what’s going on in my life, who I’m interacting with and how these aspects relate with one another. For example, when the Los Angeles Philharmonic bass players commissioned me to write a work, I had just attended a lecture on perfume and the term ‘sillages’ stuck with me. It’s a French word that means the trail or wake made by perfume. This word came to mind, and I thought of how interesting it would be to have such a delicate title for a work including four double basses! The combination of this title and the enormous instruments set up a strange juxtaposition. Andre Alexis created a poem describing the lumbering beasts and gentle fragrances. The work isn’t programmatic in any way, but this juxtaposition was my inspiration. In performances of Sillages, Andre’s text was recited by one of the bassists before the performance. In addition to some of the low and powerful sounds characteristic of the bass, Sillages combines that with high, delicate sounds you don’t expect from the bass.

Please tell the readers more about the very exciting project coming up just this month.

The Director of Hopscotch, Yuval Sharon, has an ingenious take on how to integrate opera into society. He was at New York City Opera when my opera Lady Macbeth was premiered at the VOX Festival in 2008, of which he was Project Director. When he moved to L.A. I asked him to direct a production of Macbeth in 2010 that was incredible, including acrobats, wonderful sets, etc. He went on to form the company “The Industry,” a cutting edge, avant-garde opera company based here in LA that’s getting a lot of attention. Now, this company is putting on its most ambitious project: Hopscotch.

It’s basically a mobile opera for 24 cars, driving to various locations in Los Angeles. The destinations are not known and you share the limo with singers, actors and musicians who draw you into the story. Each given car stops at a certain sight where the story continues, until another car pulls up with a whole other set of artists.

The story is divided into 36 chapters, some video animated sent in advance so people can understand main storyline before being a part of the story. There are three acts, each act about 80-90 min, with each act running several 10 minute scenes. Getting in and out of limos count as part of the time!

Over 200 people are involved in performance, production and performance and all are incredibly talented locals from the LA community. 6 composers wrote the music and the story was developed by six LA writers on a love story. All completely different scenes are put in the three acts. Only four people see each scene at a time, so it’s a very intimate setting. The order of events is also interchangeable, so you can view different parts of the story at any time. For example, a scene takes place at the beautiful landmark Bradbury Building, where you follow a singer up an elevator and then down the stairs with musicians and dancers all around you. Another scene takes place in China town where one of the characters has their fortune read, with the scene again animated by dancers and musicians. Some of these scenes are new places I’ve seen in LA, and it’s great feel like a tourist in your own!

The performances begin October 31 and run until November 15. For more information, as well as videos and updates, check out the official website http:// hopscotchopera.com/ or Veronika’s website http:// veronikakrausas.com/home.

Previous A Song Festival to Be Long-Remembered
Next Springfield Lithuanians